GOMA – U.S President Donald Trump has said he ordered the deployment of U.S military to Gabon amid fears of violent unrest in neighbouring Democratic Republic of Congo (DRC) after both opposition and ruling party candidates claimed victory in presidential election that ended on Sunday.

International community and human rights groups have warned of potential uprising should the actual results be manipulated.

The government has cut internet, barred some foreign observers, including the European Union, and withdrew the accreditation of Radio France Internationale’s correspondent earlier this week.

The Electoral Commission (CENI), the only body mandated to announce the winner said they are still counting the votes and urged all parties to remain calm. Provisional results are due to be announced tomorrow but ceni officials indicated they could be delayed as a result of slow arrival of tally sheets.

More than 40 million voters registered to participate in the presidential and parliamentary elections expected to see a peaceful transfer of power since the largest central African nation gained independence in 1960.

Tension is also growing between electoral commission and National Episcopal Conference of Congo (CENCO), an influential and independent group that deployed 40,000 observers on voting day, after the latter said on Thursday that the results it has so far collected indicated who had won, without identifying the person.

The announcement by CENCO has angered Congo’s ruling coalition who warned that early pronouncements on the outcome of the results could instigate a revolt.

“The announcement by CENCO can brainwash the population by inciting a revolt,” the ruling party said in a statement.

Trump said the U.S. sent 80 troops with combat equipment and supported by military aircraft to nearby Gabon to support U.S. Embassy staff and citizens in Kinshasa in case violent demonstrations erupt.

“The first of these personnel arrived in Gabon on January 2, 2019, with appropriate combat equipment and supported by military aircraft,” Trump’s letter to Congress read.

“These deployed personnel will remain in the region until the security situation in the Democratic Republic of the Congo becomes such that their presence is no longer needed.”

Twenty one candidates participated in presidential election but the real contest is about three candidates who include Emmanuel Ramazani Shadary, the candidate of the ruling Common Front for Congo, or FCC, and two main opposition candidates Martin Fayulu and Felix Tshisekedi.

Days before election, opinion by Congo Research Group put opposition candidate Fayulu in the lead with 44 percent while Shadary who is supported by outgoing president trailing with 18 percent. 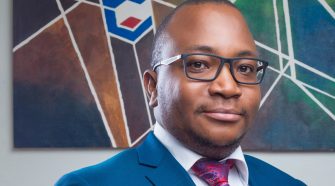