The Gagamel entertainment boss, Bebe Cool known for his signature ‘Silent Majority’, got excited after Trump used the statement to respond to criticss over the death of a Black man George Floyd killed by a white American Policeman.

“Finally the president of the United States of America subscribes to visionary Silent Majority” Bebecool posted on facebook.

One of his fans, Nelson Luyima sarcastically said Trump also believes in numbers and will soon ask to be added to the group.

“He also believes in numbers and actions not words, soon he will also ask you to add him to the group because his application is successfully approved,” Luyima posted.

However, some of the fans blasted Bebe Cool saying the phrase was popularized by former US president Richard Nixon in 1969.

“To those who don’t know, the word silent Majority was actually popularized by President Nixon Richard in the 1969 televised broadcast before even Bebe Cool thought of being in Ugandan politics, it’s actually an English compound word,” Alex Keys commented.

“Village excitement. Silent Majority was popularized by President Nixon way back in 1960’s in the USA,” Mu Star classic commented.

“This time has revealed who you are to the whole world, I vehemently believe that this slogan is being used by the wrong doers to defend themselves, honestly there’s no difference,” a one Abdul Wahab Abaz Hassan replied. 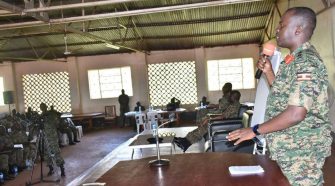