Former Minister, Lt Gen (Rtd) Henry Tumukunde has condemned the manner in which security agencies raided his upcountry home in Rukungiri to conduct a search.

Tumukunde who is hospitalized at Kampala Hospital has accused security in Rukungiri led by the RDC, Dan Kaguta of conducting an illegal search.

In a message posted on his social media, the former Minister of Security who was arrested last week said a team of investigators from both the police and other security organs “forced their way” into his house in Rukungiri.

All people found at the residence were rounded up, he said.

“The search happened without my presence. They are being led by the RDC Dan Kaguta! Having failed to find whatever they are looking for, they are now in the process of breaking down my village house,” the post added.

While some sections of the media reported on Tuesday that Tumukunde had been discharged from hospital and was heading to Rukungiri, he says this is false.

The retired General was whisked off to CID Headquarters in Kibuli for a statement and later taken to SID Kireka.The treason charges are linked to a series of alleged treasonous utterances in radio and television interviews this week.

A joint team of the Chieftaincy of Military Intelligence (CMI) and the Police Directorate of Investigations searched his Kololo-based offices on Friday and recovered military gear and a group of army deserters according to a source who was part of the operation.

He was admitted to hospital a few days ago over deteriorating health, according to reports.

At the beginning of this month, Tumukunde surprised many when he announced his intention to run for Presidency next year. 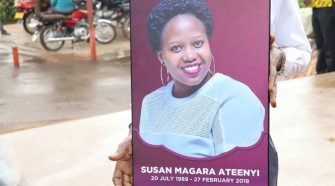 2018, a Year Defined by Catastrophic and Unfortunate Events