Information and ICT Minister, Frank Tummwebaze has said the government won’t police social media to crack down on bullies and trolls that have increasingly become a concern for internet users globally.

He advises that internet users who are on social media should rather assume the moral high ground by ignoring trolls.

Victims of such behavior may suffer low self-esteem, increased suicidal ideation, and a variety of emotional responses, including being scared, frustrated, angry, and depressed.

On Sunday, Minister Tumwebaze tweeted that he has repeatedly received concerns from internet users regarding the need for stronger regulation of the digital space.

“Each day, I get engaged by a concerned citizen about the need to control cyber bullies and hired trolls that defame others. True, weak, incompetent and insecure people do hire online mercenaries to speak good of them and tarnish others,” he said.

He said the vice happens across the divide both in government to fuel intrigue, and in the private sector.

“They target those they perceive as threats or opponents. They hire people to craft all sorts of weird lies and fabrications to splash online”.

“My advice is that government will not Police these platforms. The sober people should choose to reject these cheap schemes (bufere) of weaklings,” Tumwebaze proposed.

He says there’s need to do research and get reliable intel to expose the trolls who he branded “weak minds” that have resorted to discussing people rather than ideas.

“Let’s sanitize our platforms by separating substance from form. This affects everybody. While it may appear okay to attack some of us in political public service/life, because we are able to withstand all that and build hard skin, it’s heart-breaking for private people especially private business people,” Tumwebaze said.

The law defines cyber harassment as the use of an electronic or data processing device for purposes of making any request, suggestion or proposal which is obscene, lewd, lascivious or indecent; threatening to inflict injury or physical harm to the person or property of any person.

“Any person who willfully and repeatedly uses electronic communication to disturb or attempts to disturb the peace, quiet or right of privacy of any person with no purpose of legitimate communication whether or not a conversation ensues commits a misdemeanor and is liable on conviction to a fine not exceeding twenty four currency points or imprisonment not exceeding one year or both,” the Article reads.

Former Makerere University researcher, Dr Stella Nyanzi who is jailed in Luzira is among those who are already facing charges of offensive communication.

Prosecution alleges that Nyanzi used her Facebook page to post a poem full of vulgar language where she was attacking Museveni’s late Mother, Esteri Kokundeka wishing that Museveni died before he was born.

However, Nyanzi has since denied the charges. She told court she instead used the poem and metaphors to protest against the oppression resulting from the bad leadership of NRM. 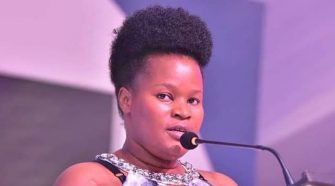 Nantaba: Police was Ordered by Powerful People to Kill Ssebulime So as to Silence Him