Former NTV presenter, Justine Nameere has come out to respond to allegations put against her by NTV news anchor, Faridah Nakazibwe saying she is neither jealous about her life nor her husband.

On Easter Sunday, Nakazibwe wrote serious accusations against Namere whom she claims has tormented her and threatened her marriage. In a post on her Facebook page, Faridah said she was tired of keeping silent while her marriage risks being torn apart.

She says Nameere has been creating fake Facebook pages and sending messages to her husband, Dr Omar Ssali to portray her as a prostitute who goes around having sex outside their wedlock. In the post, Faridah attached screenshot images of inbox messages from different persons who claim she is unfaithful to her husband and a disgrace to her family.

In some messages, the senders inform the Dubai based Dr Omar of the numerous gifts that his wife (Faridah) receives from other men and also claim they have evidence to prove that she is cheating on him with other men. They also repeatedly promise to hook him up with other young and beautiful Qatari ladies so he can dump the “old prostitute woman” (Faridah).

“Now you think you can play smart?….. We are 100 times more smarter than both of you. If it’s social media, we know how to play it, if it is character assassination, hey we are smarter. You either go with our demands or wait,” a message from a Facebook page in the names of Ruth Ruthless to Omar reads.

The same people threaten Faridah with witchcraft, an acid attack and media stories to torture her until she gives up on the marriage.

Faridah sounds convinced that Nameere, a former workmate is the mastermind of the over 10 fake Facebook accounts created to feed her husband with false information about her ‘infidelity’.

“Am not so sure what your cause is… I am only seeing a woman focused on bringing me and my marriage down,” Faridah wrote, referring to Namere.

“You have tapped my phones, hacked my Facebook and email accounts, you have offered my friends money in exchange of information about me, stalked me on TV, office and along the way home, but still you can’t produce proof of my alleged infidelity,” she adds.

But despite these serious accusations, Faridah does not provide substantive evidence to prove that Nameere is behind these messages, except stating that Nameere’s mobile number has been given as a telephone contact to her husband for more information.

She further claims she is in possession of voice call records made to her husband and video footage of Nameere at her (Faridah) friend’s office where she was seeking information about her.

However, in a response posted by the accused who is also married with two kids, she denied any involvement in the said messages.

Nameere posted; “I have one man, he’s the father of my children. He’s the only one i am after every day!…. I have no reason whatsoever to go after your man whom I don’t know!”

The former presenter of ‘Life Stories’ show on NTV and ‘Life and People’ on Urban TV too claims Faridah has been “harassing” and “threatening” her with claims about ruining her marriage, for close to two years.

She however reveals that Faridah has continuously been hesitant to substantiate her allegations despite requests to prove that the messages referred to by Faridah originated from her phone or her authentic Facebook account.

“If they’re fake pages what makes you believe it is Justine behind them and how did you know they are fake pages?” she wonders.

She says she has made several attempts using her lawyers and the Police to have Faridah and her husband corroborate their claims with the help of I.T experts, but that the two have failed to cooperate.

“Can you please produce any technical evidence that you have collected over the two years of harassing me, showing that your “fake pages” are mine?” Nameere wrote.

Faridah Nakazibwe is not new to controversy. For several years, she has been a common subject in news tabloids, with speculation about her love affairs including that with NRM’s Vice Chairman, Al-Hajji Moses Kigongo.

It appears that the long feud between Nameere and Nakazibwe is far from being settled, and the only immediate remedy to the dispute seems to be for the accuser to back up her claims with credible proof. 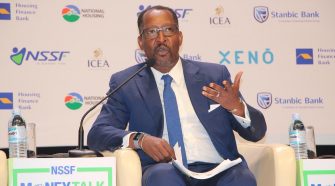