Col Edith Nakalema who heads the State House Anti-Corruption Unit said they received a complaint that His Excellency the President’s private land at Katwekambwa in Kabulasoke Sub County, Gomba District had been encroached on by Mr. Segane Peter and Mr. Suuna Jimmy.

“Working with the Police, investigations were initiated and the suspects arrested,” she said on Monday at her offices.

The investigations have so far revealed that; Peter Ssegane and Jimmy Suuna had fraudulently acquired 5 land titles of land already registered in the name of Yoweri Kaguta Museveni.

“We identified a number of lapses in the processing of the titles at the levels of the Area Land Committee, District Land Board and Ministry of Lands,” Nakalema said.

The file in respect to the two suspects has been forwarded to the DPP and investigations are ongoing, all those found culpable will be prosecuted. 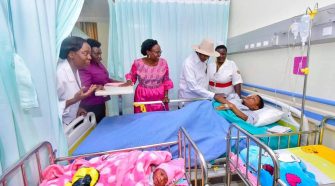