Two people have been arrested in connection with the murder of a German national in Buikwe district last week.

Remus Manfred ,71, an engineer and former worker at Uganda Batteries Limited, was shot dead by unknown assailants at his home in Njeru Municipality in Buikwe district last week.

Addressing journalists on Monday, police spokesperson Asan Kasingye said the police had arrested Hamid Bogere, Abdalla Luwuge from Makenke village who were found in possession of a pistol suspected to have been used in the murder.

“On questioning, they could not explain how they got the pistol. One of them admitted to have pulled the trigger,” Kasingye said.

The police mouthpiece also revealed that the pistol suspected to have been used in the murder had been recovered from the 2 suspects.

Kasingye said police will do a forensic investigation to link the pistol to the bullet recovered from the deceased’s body as part of the investigations into the murder.

According to Kasingye, the 2 suspects will soon be charged for the murder of the German national.

Manfred was killed by assailants who reportedly first demanded for money from him before shooting him .

He was pronounced dead on arrival to hospital where he was rushed by neighbors. 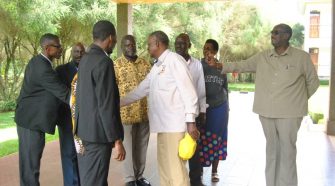 Kamuntu Challenges Locals to be More Vibrant in Marketing Tourism