Uganda Police Force has arrested two of its officers in Masaka, over an incident where a man identified as Walugembe Hussein, 25, set himself on fire at Masaka Police Station.

Preliminary facts indicate that the motorcycle was impounded on 30 June 2020, by Sgt Ewalu Julius, after it was found parked at a petrol station that was undergoing construction, where the victim (now deceased), worked as a local night guard.

Fred Enanga, the Police spokesperson, said the victim had recently acquired the motorcycle in a period of one week, and it was being ridden by a friend called Kaweesi Twaha of Masaka City, since he never knew how to ride.

“He was therefore, not a bodaboda rider as alleged in the media. On the 1st June 2020, he went to Masaka Police Station to reclaim his motorcycle, and returned on 2 June 2020, but all in vain,” Enanga said.

It is believed that, on the 2 June 2020 his rider, Kaweesi Twaha, had raised Shs 40,000 as a bribe to Sgt. Ssesanga Ibrahim, but the victim rejected the move since he was well known at the Police Station.

“it was after Walugembe was fully frustrated by the Ag. OC Traffic that he went and bought petrol from Mogus Petrol Station and set himself ablaze. He attempted to grab the officer, for them to die together, but he escaped with minor burns, leaving the victim behind,” Enanga noted.

Enanga said two police officers, Sgt Ewalu Julius, the Station Major and Sgt Ssesanga Ibrahim, the acting OC Traffic were arrested for acting negligently and unreasonably in holding the motorcycle without explanation or issuance of an EPS ticket.

“The act of suicide at the police station is evidence of lack of vigilance by some of our commanders. So far two officers who were insensitive to the plea of the victim, have been arrested for exerting pressure on the victim to part with shs 40,000 bribe for the release of his motorcycle,” Enanga said.

The IGP has also dispatched a task team headed by Director Operations, AIGP Edward Ochom, and the Director Traffic and Road Safety, to thoroughly investigate circumstances under which Hussein died.

The task team is also investigating possible breach of police duties, negligent supervision, and failure to follow police procedures, failure to provide medical and life saving response to the victim and integrity related concerns of extortion and bribery at Masaka Police Station.

Enanga, said the IGP has extended his heartfelt condolences and prayers to the immediate family, friends and relatives of Hussein Walugembe. He has also reached out to his family.

In order to prevent reoccurrence of the unfortunate incident, the IGP has further instructed the Directorate for CPC and Legal/HRS to conduct special gate-keeping trainings for all police officers, on the basics of recognizing and responding to the warning signs of suicide with emphasis on frontline officers and first line supervisors because of their day-to-day contact with fellow officers and the public.

Despite the very regrettable incident, the police has reiterated that, it is made up of officers of integrity who pride themselves in high standards of discipline and professionalism to keep the country safe. 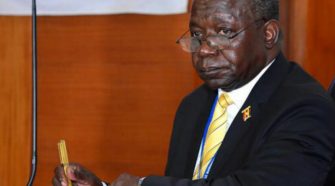