The UPDF has received a message of solidarity from the U.S. Africa Command following the attack last week in which 8 Ugandan peacekeepers were killed in Somalia.

On the morning of Easter Sunday, militants from the Al-Shabaab terror group targeted the AMISOM Forward Operating Bases at Quoroyole, Buulo Mareer and Golwen in Lower Shabelle Region of Somalia. The terrorists detonated two vehicles inside the base, killing some 4 UPDF soldiers while 4 others succumbed to injuries later.

In solidarity with Uganda which was the first country to deploy troops in Somalia, eleven years ago, the U.S. Africa Command has commiserated with the Ugandan army for the loss it suffered in its efforts to restore stability in Somalia.

This is contained in a message written to Uganda’s Chief of Defence Forces, Gen David Muhoozi by Gen Thomas D. Waldhauser, the Commander of the U.S. Africa Command.

In the April 3 letter, Gen Waldhauser writes: “I was deeply saddened by the tragic loss of Ugandan soldiers in Buulo Mareer, Somalia on April 1”.

“Tragedies like these remind us of the high cost our nations pay to combat terrorism, protect freedom and enhance regional stability,” he adds.

The U.S. Africa Command is one of nine unified combatant commands of the United States Armed Forces and it is responsible for U.S. military operations, including fighting regional conflicts and military relations with 53 African nations.

The U.S. General says Uganda “remains as a vital partner in reducing the threat of Al-Shabaab and ensuring security in Somalia” and that America “recognizes the essential capabilities your soldiers provide to the mission and their brave efforts to restore peace”.

He further notes that the international community sincerely appreciates Uganda’s sustained contribution to the Africa Union Mission in Somalia (AMISOM).

“On behalf of the women and men of U.S. Africa Command, please accept our heartfelt condolences,” Gen Waldhauser noted.

Meanwhile, the UPDF spokesperson, Brig Richard Karemire has since confirmed to this website that all remains of fallen soldiers have been repatriated to Uganda for send off.

The Ugandan contingent remains the largest in AMISOM with 6,223 troops based in Sector 1 which comprises of Banadir (Mogadishu), Middle and Lower Shabelle regions.

Until now, Uganda has deployed 12 battle groups into the Mission area. The recently deployed Battle Group 12 joined their Burundian counterparts in Baidoa. 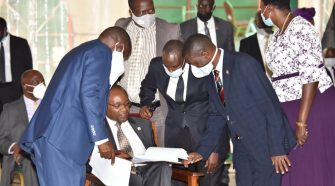