The Head of the United States Mission to Uganda, Ambassador Deborah Malac has bid farewell to President Yoweri Museveni as her tour of duty to Uganda ends.

Malac was nominated to Uganda by U.S. former President Barack Obama and started her tour of duty on September 19 2015.

The Ambassador has been faulted by some members of the public and politicians for interfering in Uganda’s political affairs and openly backing individuals against President Museveni in contravention of the code of conduct expected of Members of the Diplomatic Corps.

President Museveni has, however, wished her good luck in her next endeavours at a meeting held at State House Entebbe on Thursday.

“After thirty-nine (39) years in diplomatic service alone for the United States of America, Ambassador Deborah Malac tells me she will be retiring at the end of her term here in a few days. I congratulate her and wish her good luck in her next move,” he said.

Malac who will reportedly be replaced by Amb Natalie E. Brown, replaced Amb Scott DeLisi in 2015. 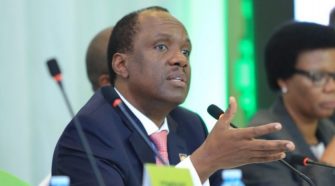