Examinations body, UNEB has released the results for the 2017 Uganda Advanced Certificate of Examinations (UACE), reporting a decline in performance compared to the previous year.

This implies that the number of students that qualify for university admission has reduced by a total of 6,687 from what it was last year.

In cases where one Principal and two subsidiary passes levels are considered for admission to other tertiary institutions, a total of 83,301 qualify compared to 88,659 in the previous UACE results.

In regards to performance by subject, Literature in English, CRE, Physics and Biology showed improved performance in comparison with 2016, but Economics and Entrepreneurship registered more grades at A pass level.

“The problem of poor communication mentioned at UCE level still persists at this level as well. The work of those candidates affected show misunderstandings of questions leading to giving wrong answers; inability to explain, interpretation and original formulation of responses,” Odongo noted.

The UNEB Chairperson, Prof Mary Okwakol said that cases of malpractice at UACE level have been quite low with results of 79 candidates from 24 centres currently being withheld for suspected script substitution, impersonation and receinvinf assistance in the examination.

Meanwhile, one of the major concerns is the 2.9% drop in the number of candidates who registered for UACE in 2017 begging the question – where are these students going?

The downward trend has been consistent since 2014 and UNEB suspects that the missing students could be joining the alternative post UCE courses like vocational, technical and nursing trainings among others.

“It is possible that those who don’t sit for UACE are joining other careers but we have not done research on this,” Prof Okwakol said.

Responding to this, Dr Wilfred Nahamya, the Deputy Executive Secretary for Uganda Business and Technical Examinations Board (UBTEB) told journalists that; “For the last five years, there has been a 9.7% increase in the intake for Diploma courses in Business and other technical and specialized fields”.

“This must explain the numbers that do not join A’Level,” he said. 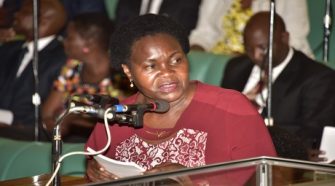