Communications regulator, UCC, has described as fake news comments attributed to the UCC Executive Director, Eng Godfrey Mutabazi regarding a ‘ban’ of Bobi Wine’s new song ‘Tuliyambala Engule’ and said those responsible for publishing it will be arrested.

This week, a photo of a post by Media Vision Uganda made rounds on social media alleging that Eng Mutabazi had warned televisions and radios against playing the song.

The same post claimed the UCC Executive Director had said the song was not to be played anywhere as it is treasonous and disturbs the peace of the President.

Now, UCC has issued a statement clarifying that Eng Mutabazi made no such comments. The regulator warned individuals and media outlets in the habit of publishing or sharing fake news, saying they risk facing prosecution.

“An online page managed by an individual that has since been identified published fake and misleading information against the person of the Executive Director of UCC”.

Pamela Ankunda, the Public Relations Officer for UCC told SoftPower News that the proprietors of Media Vision Uganda will be arrested.

“They will be held responsible for putting out that post. We are going to arrest the proprietors of Media Vision Uganda because they are quoting someone they did not interview,” Ankunda said while speaking to this news website on phone.

“We are aware that post has been shared over a thousand times on several platforms. The law will take it’s course,” she added.

Uganda Communications Commission said in a tweet that “UCC has observed an increase in the incidences of fake publications on digital platforms, where unscrupulous individuals misuse computer systems to create, publish, and distribute unverified, misleading, and false stories”.

The regulator says publishing of false news is wrong, unlawful, unethical and defamatory.

The public has been advised to be vigilant and exercise due care by verifying the authenticity of any news stories or reports from official sources before believing and acting on them.

In its statement, UCC warned “whoever is in the habit of deliberately creating, publishing and distributing fake news or stories” and other acts of computer misuse risks possible prosecution under the Computer Misuse Act 2011 and other Penal laws of Uganda.

The Commission said it will continue to monitor, control and regulate communications services, to promote and safeguard the interests of consumers and operators as regards the quality of communication services in Uganda as mandated by law. 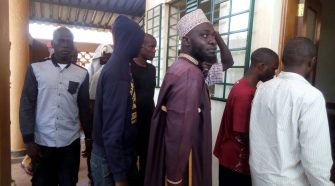