On Friday, UNEB released results of last year’s Uganda Certificate of Education (UCE)  results indicating that 333,060 candidates sat for the examination out of the 337,720 who registered.

Of the registered candidates, 410 were Special Needs Education students who consisted of 36 blind, 87 low vision, 60 deaf, 26 dyslexics, 78 physically handicapped students, and 123 with other forms of disability.

Among the Special Needs Education candidates, was Ndyamuhaki Godwin, who has been studying from St. Henry’s College Kitovu in Masaka district, who beat his colleagues to emerge the best in the whole country with Aggregate 13 in the best 8 subjects.

Ndyamuhaki has a hearing and sight impairment problem – one of his eyes cannot see at all and the same applies to one of his ears which cannot hear at all. Only his one eye can see and the second ear hears with difficulty.

Despite this disability, Ndyamuhaki managed to score a Distinction One in English, Literature, Christian Religious Education, Mathematics and Entrepreneurship. He got Distinction Two in Geography and Credit Three in History, Physics, Chemistry and Biology.

Ndyamuhaki’s teacher and the Director of Studies at St Henry’s College Kitovu, Tumusiime John Baptist, describes him as “a generally very bright boy.” He says during the lessons, he uses his only eye to monitor the movement of the teachers’ lips in order to draw meaning from what they teach.

“You must be in a certain position for him to follow you up,” Tumusiime told SoftPower News on Friday.

“Thereafter, his benefactor who was helping him – the Priest – opted to bring him to St Henry’s College Kitovu and introduced him to the school and the headteacher took him up as his own son and eventually gave him a scholarship. He has since been benefiting from a school scholarship program,” he said

Due to their peasantry nature, Ndyamuhaki’s parents have never visited him at school in the four years he spent at St Henry’s College Kitovu.

“I have personally been in touch with his parents who survive on crushing stones in Kashari to make a living. They are these people who make stone aggregates. We have never seen them at all since they have never come to visit him at school. In fact, when Ndyamuhaki breaks off for holidays he does the same work in the village,” Tumusiime said.

Asked about what he feels about Ndyamuhaki’s performance, Tumusiime said he is excited about it since his student who many people would despise, has emerged among the best performers in the country.

“I am very excited because this boy forced us to teach in a certain way. You had to teach when he is seeing you and you had to make sure that most of the times you teach with your lips focused towards him in order for him to read their movement and get to know what you are saying,” he said.

According to Tumusiime, Ndyamuhaki is a very determined person who treasures his success in education and would always follow up teachers for explanation whenever he doesn’t grasp certain concepts.

Asked whether they conducted special lessons due to Ndyamuhaki’s disability, the teacher answered to the contrary, saying he would pick and follow at once with other students as long the teacher is positioned in one place and is properly following him or her.

He says as a Director of Studies, he would wish that the school or other good Samaritans step in a continue supporting this student who has beaten all odds to prove that disability is not inability to help him progress with his higher education. 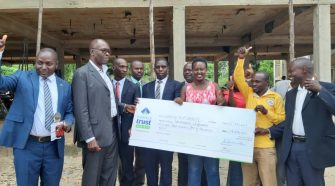