The Uganda Air Cargo Corporation (UACC) has said it is in need of a total of Shs 55bn (equivalent of USD 15m) required for recapitalization as well as boosting their operations.

Established in 1994, UACC is an airline based in Kampala, Uganda. The carrier operates scheduled and charter cargo services from its main base at Entebbe International Airport to destinations in East and Central Africa.

The Chairperson of the Corporation, Capt. John Emily Otekat, told Members of Parliament sitting on the committee of Defence and Internal Affairs on Tuesday that the Corporation is currently operating one aircraft which demeans their capacity to take on a number of contracts.

“We are requesting government to provide us with funds to prepare the second Aircraft (C130) to give a back up to the existing aircraft. It is very difficult to win a contract if you have only one aircraft and this will cost us 10 million U.S dollars,” Capt. Otekat said.

Otekat noted that the Corporation will be using the other USD 5m to purchase a new aircraft Boeing B73-500 for troop rotation and running capital.

The legislators on the committee agreed that the Ministry of Defence should prepare a supplementary budget to enhance the UCCA operations.

“The Ministry of Defence should prioritize the UCCA, you realize that the time UCCA operating license was withdrawn in 2014, the company suffered a loss yet it was generating money and it is now making profits,” said Ruhinda county MP Donozio Kahonda.

The Minister of Defence, Adolf Mwesigye noted that government indeed prioritizes UACC but it is most times overwhelmed with limited funds.

“UCCA doesn’t only have the potential to make money for government but also provides good support to the operations of the army which is very critical,” Mwesigye said.

He added that, “Within the Ministry, we give it a lot of attention, we have made this known to the Ministry of Finance several times but the general National resource envelope is limited and sometime we don’t get the response we request for”. 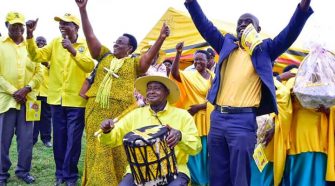