The two Bombardier aircrafts that will be used by the Uganda Airlines are set to be delivered in Uganda on April 23 this year, the Ministry of Works and Transport has said.

Last month, Parliament of Uganda passed the Supplementary request of Shs 280bn as development expenditure to the Ministry of Works and Transport for the purchase of the Bombardier aircrafts ordered by the national carrier, Uganda Airlines.

On Monday, Don Wanyama, the Senior Presidential Press Secretary tweeted; “Be there! On April 23rd, at exactly 3pm, the first of the @UG_Airlines Bombardier CRJ900 will touch down at Entebbe International Airport. And with that, will mark the revival of the airlines. Great times ahead”.

This was later confirmed by Susan Kataike, the Public Relations Officer in the Ministry of Works and Transport. She told SoftPower News on Monday that the first delivery of the Bombardiers is indeed due on April 23.

Asked on whether this implies that commercial flights will begin upon delivery, Kataike said the aircrafts will have to first undergo certification as required by international aviation procedures.

“When they come, they will undergo certification which takes time,” she told this news website.

“Then, there will be training of cabin crew and marketing of the airline in the different destinations that it will be flying. This is the standard procedure for any county that buys airplanes,” Kataike said.

She however could not provide an exact timeline when this procedure is expected to be completed.

“The Minister will be addressing the media on Wednesday at 9am at the Ministry. The details will be provided,” she said.

In February this year, the first of the new Bombardier jetliners underwent a flight test in Canada where they were manufactured.

The white bodied jetliners are branded ‘Uganda Airlines’ with a tagline ‘Fly the crane to the Pearl of Africa’. Their verticle stabilizer, rudder and part of their hind lower fuselage is designed with the Uganda flag colours and a crested crane.

Uganda has also made an order with Airbus for the manufacture of two A330-800s which will be making the long international routes. 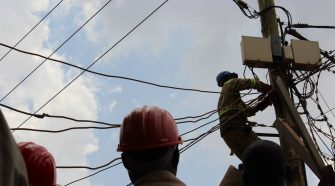