Uganda Airlines has Monday received an additional 2 Bombardier CRJ 900 aircraft expanding its fleet of the model to 4, a delivery that will see the newly revived airline extend its flights to more regional routes.

The two aircraft landed at Entebbe International Airport at around 3pm on Monday afternoon amid a warm mood of jubilation. A delegation of government officials led by the State Minister for Transport, Gen Katumba Wamala attended the ceremony to receive the jetliners.

The jetliners are the last two of Uganda’s order from Canadian plane manufacturer, Bombardier Inc. The initial two were delivered in April this year.

Minister, Gen Katumba Wamala used the ceremony to appeal to Ugandans to support the airline, and to also leverage the economic opportunities it presents.

“I want to appeal to Ugandans that these aircraft are our property, our infrastructure, our taxes, our flag. Support the airline. Behind this airline is a team of people that are committed to deliver and they need your support,” he said.

“Let’s stop being negative,” the Minister commented, citing the negative media publicity and the bad comments that dominated social media sentiment on the arrival of the first fleet.

He called for a spirit nationalism among the Ugandan public.

He said the revival of the national carrier presents opportunities that can improve livelihoods for the ordinary Ugandan.

“Even if you are not going to fly on this airline, do something. If you can’t fly on the airline, at least sell a tomato or water melon on it, so that you can also benefit from it”.

“We are looking at markets like China. Today, the Minister of Agriculture told us that there’s a lot of demand for Ugandan fish in China due to the good quality of our fish. So, let’s all make use of these aircraft to make our economies better both individually and as a country”.

He commended the Captains and cabin crew of the airline for the patriotism they have exhibited by choosing to leave their previous jobs with other airlines to work with their country’s newly revived national carrier.

Uganda has already ordered for two Airbus A300-800 Neons scheduled to be delivered in December 2020 and January 2021. These will be flying the longer routes to European destinations as well as Asia.

The Minister said there’s still work to be done. He urged the Management of Uganda Airlines to focus on delivering great service and maintaining the highest standards.

The Uganda Airlines Board Chairman, Ahabwe Godfrey Pereza says Uganda Airlines is committed to excel in its operations and in the provision of services which fall within the expected international standards.

The CEO of the airline, Cornwell Muleya said the market has responded well to the service offered by the airline since it commenced its commercial operations on August 28.

The four aircraft that Uganda Airlines is currently operating are Bombardier model CRJ900 and Uganda becomes the first country in Africa to acquire them. They sit 76 passengers (12 in business and 64 in economy). 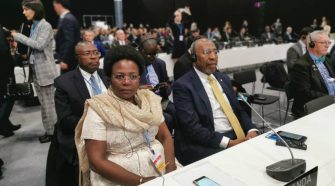