This, he revealed during the handover of the 2018 Auditor General’s Report to Parliament which was received by the Speaker, Rebecca Kadaga.

Muwanga noted that although Uganda’s debt to GDP ratio of 41% is still below the International Monetary Fund risky threshold of 50% and compares well with other East African countries, it is unfavorable when debt payment is compared to national revenue collected.

He said that if government is to service the loans as projected in the next financial years 2018/2019 and 2019/2020, it would require more than 65% of the total revenue collections which is over and above the historical sustainability levels of 40%.

“Interest payments (domestic and external) during the year amounted to Shs 2.34 trillion which is 17% of the total revenue collections, above the limit set in Public Debt management Framework 2013 of 15%,” Muwanga said.

He noted that this has been on the rise for the last four years.

The Auditor General has noted that there has been improvement in absorption of external debt although a lot still needs to be done.

“I noted some loans with absorption levels as low as 10% and below. An example is the USMID project with over Shs 95bn (95%) still on the various accounts of Municipal Councils by close of year, despite various incomplete and abandoned works due to non-payment of contractors.”

“Mbarara-Nkenda and Tororo-Lira transmission line has delayed for almost 8 years resulting into cancellation of the loan by the funder with an undisbursed loan amount of USD6.5m.”

The Auditor General warned that Uganda risks failing to pay off the increasing debt since there are very stringent conditions attached to the loans offered.

“These conditions include; waiver of sovereign immunity by government over all its properties and itself from enforcement of any form of judgment, adoption of foreign laws in any proceedings to enforce agreements, requiring government to pay all legal fees and insurance premiums on behalf of the creditor,” he said.

Sovereign immunity is a judicial doctrine that prevents the government or its political subdivisions, departments, and agencies from being sued without its consent. The doctrine stems from the ancient English principle that the monarch can do no wrong. 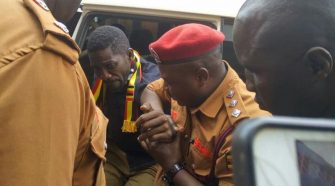