Sebastien Desabre, the head coach of Uganda’s national football team, The Cranes has cut short his contract as the team’s tactician, just a day after Uganda bowed out of the Africa Cup of Nations (AFCON) final tournament at round of 16.

In a statement by the football governing body in Uganda (FUFA), his leaving was for the benefit and growth of both parties.

“On the 6th of July 2019, both FUFA and National Team Head coach of the Uganda Cranes Mr. Desabre Sebastien Serge Louis mutually agreed to terminate the contract between the two parties,” reads FUFA’s statement in parts.

“FUFA recognises the contribution by Mr. Desabre for the improvement of the sporting and professional organisation of the Uganda Cranes inclusive of qualification to the AFCON 2019 Finals and also to the Round of 16,” FUFA adds.

FUFA says Desabre is grateful to the people and the Government of Uganda, FUFA, Sponsors, Staff and the players that have provided him a good environment to fulfill his obligations in his first time role as a National Team Coach.

The French national was appointed on a three year employment contract in December 2017 replacing Moses Basena who was serving on an interim basis following Milutin Micho Srjedevic’s untimely departure.

Desabre guided the Cranes to 2019 AFCON finals before leading the team to the knockout stage of the competition for the first time in 41 years.

The football FA “will communicate any further development about the Uganda Cranes technical staff and future programmes of the National senior team in the nearest future.”

Out of the 18 games played under his stewardship, Uganda won six games, lost 7 times and managed five draws.

There is speculation that that the tactician could join Egyptian giants Al Ahly Sports Club. 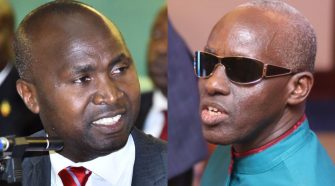