Miya who has been instrumental in Cranes team for the last couple of years, penned a three year contract from Croatian side, HNK Gorica where he has been for on a season.

Speaking after signing the contract, Miya said that: “I admired the stadium and facilities. As soon as I stepped into the club, I realised what a great community it was. I signed for three years here today.”

“During this period, I want to make a great contribution to Konyaspor with my performances. I thank everyone who contributed to my transfer. I’m excitedly waiting for the day I will be on the field.”

“I had the chance to watch the first game of the season (MKE Ankaragücü ended in a barren draw). We have a very high quality and a very strong team. I am sure that I will adapt to the team in a short time and will do my best to the end,” added.

Miya, 21, has also previously played for Vipers SC in Uganda, Standard Liege and Royal Mouscron in Belgium and FK Sebail in Azerbaijan. 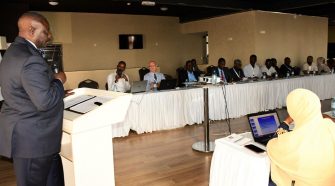