Uganda’s under 20 football team, The Hippos have Saturday afternoon beaten visitors Cameroon 1-0 in the first leg of the CAF under 20 qualifiers, in a rather competitive match, which took place at the Star Times stadium in Kampala.

The game which started with both sides attempting to put the ball behind the net, almost clocked half time with no goal despite clearcut chances from Steven Mukwala and Allan Okello in the 8th and 14th minute.

It took the intervention of Steven Mukwala who scored Uganda’s and the match’s only goal in the 44th minute sending the crowd into endless cheers.

Both sides made several changes in the second half to at least register a comfortable lead, although it yielded no tangible results. Cameroon introduced Landry Abessolo in place of Martin Ako in the 50th minute and in the 66th minute, Hippos removed Abubaker Kasule for Herbert Achai.

Uganda only needs a draw or a win in Yaoundé Cameroon on May 18 in the return leg to qualify for the continental under 20 tournament. 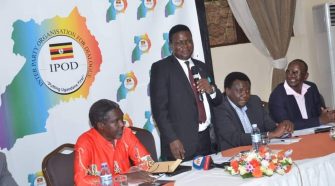