Uganda has borrowed a sum of $48 million (Shs 175bn) from the World Bank to support the country in its response against desert locusts.

The loan is from the World Bank’s International Development Association (IDA) with a maturity of 30 years and grace period of 5 years.

Similar credit was extended to countries like Djibouti ($6m), Ethiopia ($31.5 m) and Kenya ($43m) all countries that have been affected by locust invasion since late last year.

The World Bank said the objective of the Emergency Locust Response Program is to respond to the threat posed by the locust outbreak and to strengthen systems for preparedness.

This will be achieved through: locust surveillance and swarm control activities that limit locust population growth and curb the spread of swarms.

The project will mitigate the risks associated with control measures through livelihood protection through safety nets to prevent human capital and asset loss and return affected cropping and livestock households to productivity.

The countries will also use the credit to improve preparedness for future locust swarms by strengthening the capacity for surveillance and control operations to facilitate rapid response.

“Within each country, the targeted populations include those directly affected by the locust plague, and those indirectly affected through food price increases due to lost production,” a statement from World Bank states.

The World Bank Group is mobilizing a $500 million program of emergency financing, complemented by policy advice and technical assistance, to support countries affected by the locust outbreak.

IDA is one of the largest sources of assistance for the world’s 75 poorest countries, 39 of which are in Africa.

Last month, the Ministry of Agriculture asked that Finance releases Shs 16bn recently approved by Cabinet, to facilitate the fight against the latest wave of desert locusts which have so far spread across Acholi, Karamoja and Teso sub-regions in just a space of two days.

Agriculture Minister, Vincent Bamulangaki Ssempijja warned that the country had been invaded by a second wave of desert locust swarms from Kenya.

Each of the swarms is estimated between 5 to 10 square kilometres.

So far, government has spent about  Shs 22bn from its treasury and various development partners to control the locusts. But an additional Shs 16bn was needed, he said.

Towards the end of last year, Uganda was hit by the locusts in the Northern and Eastern parts of the Country. These swarms were classified as mature locusts and did not cause significant damage to the vegetation cover.

However, in April, the Minister said that the eggs that were laid are expected to hatch into nymphs and young locusts that have high affinity for food.

“This may pose an imminent danger to food security and livelihoods”.

In April, State Minister of Agriculture, Aggrey Bagiire, said: “In the last two days alone, the swarms have spread across three sub-regions – Acholi, Teso and Karamoja. This time it is tough, they have come in very large numbers, they are straining us because they are already in three sub-regions just in a space of 2 days”. 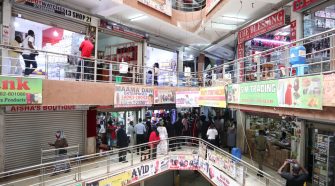 Our Reporter 4 weeks ago