The President of Guinea who is also current AU Chairman H.E. Alpha Conde has called on Africa governments to increase their investments in the African youths in order to develop their confidence and potential, as well as to assure and prepare them for their future leadership roles on the continent.

President Conde was speaking at the opening plenary session of the 29th Assembly of the African Union Heads of State and Government, meeting in Addis Ababa Ethiopia. The meeting is being held under the theme of “Harnessing Demographic Dividend through Investing in the Youth.”

He called on leaders to entrench peace, stability and the prosperity of their people in their national development agenda, reiterating “the AU’s determination to silence the gun on the continent by 2020 and have Africa become a heaven of peace and prosperity”.

The AU Commission Chairman Chad’s Moussa Faki Muhammed renewed his gratitude to Heads of State and Governments for entrusting him with steering  the Commission Secretariat, replacing Dr. Nkosizana Dlamini Zuma. He called on leaders to accelerate present levels of economic development, reduce marginalization of women and address challenges confronting the African youths today. He also called on them to increase attention towards conflict resolution and to tragedies brought by hunger and deprivation.

The assembly was also addressed by the United Nations Deputy Secretary General, Ms Amina Muhammed who, among other things, commended Uganda for not only welcoming refugees, but also integrating them in local communities.

The Palestinian President Mr Mohamoud Abbas was confident that the partnership of Africa and Palestine towards the achievement of freedom, sovereignty and independence of the Palestinian people will continue until a two state solution between Palestine and Israel is achieved.

The Zimbabwean President H.E. Robert Mugabe presented a cheque of US dollars one million to AU Commission Chairman towards making the commission self-sustaining. He said the money was raised from a donation of 300 cows from his personal ranch, the ZANU PF party and people of Zimbabwe to the African Union Foundation, contributing towards the self-sustainability of the AU Commission. 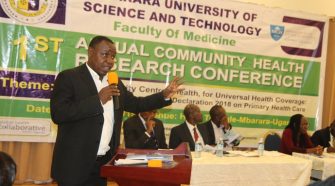