A Ugandan delegation consisting of officials from Uganda Tourism Board (UTB), Uganda Communications Commission (UCC) and filmmakers is representing the country at the prestigious Cannes Film Festival that will run from May 14 to 25 at Palais des Festivals et des Congrès in France.

The event aimed at strengthening Uganda’s film potential as premium tourist and film hub in the region is one of the world’s widely publicized film festivals often regarded as the most important festival in terms of worldwide impact.

“For first time at Cannes, an African Pavilion will be erected and is expected to be a beehive of activity as it opens for film business and monetization of content from the African continent and its diaspora” reads part of a press release from Uganda Tourism Board.

The event will run under the  theme, ‘Connecting the Past, Present and Future’.

The African Pavilion will be characterized by private and public sector roundtables, discussions on film financing and content distribution, a series of country produced destination seminars, celebrity-hosted panels, leadership workshops and film screenings among others.

Lilly Ajarova, the Chief Executive Officer UTB revealed that Uganda has in recent years received more attention given its beautiful landscape and ideal weather that has seen internationally acclaimed movie producers choose it for filming of blockbuster movies.

“Uganda is an ideal filming destination given its beautiful scenery. We have the best filming locations and with a good road network across the country, filmmakers looking to come to Uganda will be pleasantly surprised to find a ready-made set for them,” she said.

Ajarova also noted that the Cannes Festival is also a befitting platform for not only selling Uganda as a leading film destination, but also an opportunity for Ugandan filmmakers to learn from people who have mastered the art.

Ugandan independent film makers who will be attending the festival include Nisha Kalema, Malcolm Bigyemano, Sharpe Ssewali George, among others.

The Cannes Film Festival will among other opportunities give participants access to resources seldom accessible to filmmakers from developing film markets, give opportunity to countries to present their film industry potential, showcase innovation and technologies that disrupt the movie making process and costs, among others.

World over, the film industry provides vast employment opportunities. In Uganda, the film industry has in recent years gained prominence. The country now targets to gazette film shooting districts and centres of excellence across the country that will provide affordable production services in the next five years.

Godfrey Mutabazi, the Executive Director UCC notes; “Uganda is creating a unique venue for its local film trade and promotion that outlines the diversity and plurality of Uganda at the International level in television content”

“Our ambition is to become a centre for filming in Africa, through this exclusive business platform where film industry stakeholders meet, discuss, trade, make deals and take advantage of the unique atmosphere of the Festival de Cannes,” he added.

Commenting on Uganda’s participation at the African Pavillion, Oscar nominated Director and Founder of Maisha Film Lab, Mira Nair said that the festival is a great opportunity for the Ugandan film industry to tap into a global network of professionals who will enable the country harness her film potential.

“The Ugandan film industry has been on an upward trajectory given its unique storytelling tradition. The Cannes Festival therefore presents an enormous opportunity for knowledge sharing as well as establishing contacts with people who can help our industry grow more,” she stated.

Pavilion Afrique will be the first tent within the Film Market section of the Cannes Film Festival dedicated exclusively to the business of Film in the African continent and among its diaspora.

This will be situated within the heart of the Marché du Film, the world’s biggest gathering of film industry professionals who come to sell films, find partners and expand their professional network.

The film industry in Uganda was discovered as early as 1893 when its first movie was produced. Like any industry that is still growing, the industry has been plagued by numerous challenges, including funding, lack of passionate people, among others. In recent years, however, the industry is experiencing an upsurge in appreciation of its content. 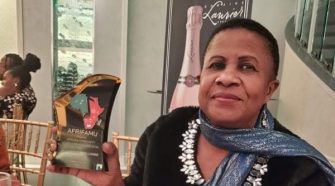