Uganda is in a fresh protest against a proposal by the United Nations Secretary General, Antonio Gueterres to relocate the UN Regional Service Center (RSC) based in Entebbe, to neighboring Kenya, Minister for Foreign Affairs, Sam Kutesa said Tuesday.

The contentious issue which almost caused a diplomatic strife between Uganda and both the UN and Kenya early last year appears to have resurged.

The reports about a possible relocation of the UN Centre first emerged in the media in 2018, following a decision taken by UN General Assembly which mandated the Secretary General to develop a Global Service Delivery Model for the delivery of standardized administrative support services across the UN Secretariat, including peace keeping and other field based entities.

The attempts to move the Shs 21bn Entebbe centre would later attract the attention of President Yoweri Museveni wrote a letter to Guterres expressing displeasure towards the plans to have the Centre moved elsewhere. Museveni regarded the move as unfair.

The President’s argument in his note to Gueterres was hinged on the need for equity in the spread of UN facilities as well as the proactive role Uganda played in fostering peace and stability in different parts of Africa.

Museveni wondered why Uganda whose contribution towards restoration of peace is prominent would not be a suitable candidate for a Centre that coordinates several peacekeeping missions in Africa.

The Speaker later in May of 2018 told Parliament that a decision had been taken by UN that the Centre remains in Uganda.

Read More: Uganda Retains UN Base After Museveni Weighs In

However, on Tuesday, Minister Kutesa while interfacing with the Parliamentary committee on Foreign Affairs said there is a revived recommendation by a consultant sanctioned by the UN Secretary General, Antonio Gueterres to move the Centre to Nairobi. He said the decision was intitially premised on the need for a more frugal expenditure in the UN operations.

“There was a restructuring at the United Nations with the purpose of reducing expenditure,” Kutesa told legislators. He said that Gueterres then appointed a consultant who later recommended that there should be repositioning of the Entebbe Centre with Nairobi (Kenya), Budapest (Hungary) and Mexico as the alternative hosts.

“We protested, we said Uganda had been serving for these ten years, capacities have been built and savings have been made to the UN. And there was absolutely no reason why this Centre should be taken elsewhere,” the Minister added.

According to Kutesa, the protests by Uganda “were met with favorable response” because “we went back to the Fifth committee of the UN to discuss its budget and the Secretary General’s report was thrown out”.

“He [Secretary General] was told to do it [report] again. Now, he has done it again but he appointed the same consultant who had been discredited,” said Kutesa.

Kutesa says it is unclear why this (using the same consultant) was done but that government of Uganda is now in a fresh protest against the move. He has appealed to Parliament to throw its weight behind the effort, arguing it is in the interest of the country.

“We are protesting again. He came back with the same recommendation about Nairobi. We are campaigning. I was talking to some members of Parliament. We want your support in this campaign, it is for our country,” Kutesa told Parliament.

According to the Minister, government has already laid two strategies for the campaign to retain the UN base in Entebbe but he could not publicly disclose details.

Currently, the UN Regional Service Center (RSC) based in Entebbe provides a range of administrative, logistics and information and communications technology services to thirteen client missions in Africa, representing over 73% of all United Nations peacekeeping and special political missions worldwide.

It coordinates UN Missions in; Central African Republic, Mali, Democratic Republic of Congo, Darfur (Sudan), Abyei (UNISFA), South Sudan, Somalia, the Office of the Special Envoy of the Secretary-General to the Great Lakes Region and Burundi.

Important to note is that the RSC in Entebbe makes a significant impact on the local economy through employment to 285 local staffers, tax revenue and other services rendered to the 134 international staff who reside in Uganda. The benefits on the business value chain is ernomous. 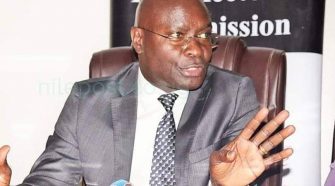