President Yoweri Museveni has warned against the recent threat by Ugandan government official to retaliate against the Kenyan government for blocking Ugandan milk, saying he will not accept for that to happen.

The President said this Friday while addressing the NRM National Executive Council (NEC) meeting at State House in Entebbe.

“The other day in Kenya, some people blocked the milk which had gone there. And I saw some of our people here saying ‘We must retaliate against Kenya’. No, I don’t want to hear retaliation against Kenya,” Museveni said.

“I will not accept that, because President Kenyatta is a very very friendly person, very clear-headed on business, because he’s a businessman himself, but also on African issues. We need to deal with our people and explain to them both in Uganda and Kenya that protectionism is not the right way” he added.

Museveni’s warning comes amid a trade dispute between Uganda and Kenya after Kenyan authorities blocked and confiscated Lato milk and milk products worth Shs 1.3 billion.

Just this week, Uganda’s Trade Minister, Amelia Kyambadde revealed that Uganda had written to Kenya and given the authorities there an ultimatum of 15 days, failure of which would prompt other measures including retaliation.

“We gave them 15 days. We are left with a few days [they are yet to respond]. We will negotiate with them and if they don’t respond, we will send a delegation there. We might even go to the political level. In business, sometimes that [retaliation] is necessary. You pick a product and put measures,” Kyambadde told reporters in Kampala recently.

On January 15, the government of Uganda wrote to Kenya protesting the manner in which authorities there had “deliberately constrained and imposed unwarranted restrictions” on the importation of Uganda’s milk and milk products into Kenya.

Kenya claims the products are contraband, counterfeit and substandard.

In the note, Uganda said it was deeply concerned about the allegations that they are contraband, counterfeit and substandard, and a sustained negative campaign against Uganda’s milk products.

“This contravenes the principle of good neighborliness and Kenya’s obligations under the Treaty Establishing the East African Community, Customs Union Protocol, and Common Markets Protocol and the WTO Trade Facilitation Agreement”.

such a profound and negative reaction from the government of Kenya”.

Uganda threatened to reconsider its stance, especially on Kenyan exports to Uganda should Kenya fail to end the current milk blockade.

“The Ministry would like to recall that Uganda also has strategic sectors within her economy which experience high levels of imports from Kenya but has not taken the route Kenya has taken. At the moment, the government of Uganda is exercising maximum restraint but reserves the right to reconsider this position”.

Uganda requested Kenya to immediately release the seized consignments of Lato branded milk and to cease any operations specifically targeting Ugandan made milk.

In his speech on Friday, Museveni said Uganda is faced with a challenge of (lack of) market. He made a case for a bigger market for Ugandan products saying the East African Community (EAC) is a market opportunity.

“We now have a problem of the market. And the bigger the market, the better. That’s the line of the NRM. We need a political movement n Africa working for the prosperity of Africans”.

He said that East Africa must strive to achieve political unification which has been the aspiration for close to 60 years.

“So, these arguments of ‘The Kenyans have stopped the milk”, how will they stop it if it’s one country? It’s one country – East Africa. This closing of borders, it’s because the borders are there. If the people are united, which border are you going to close?”

He said the geographical borders which he termed as “barbed wires” are the primary cause of the disputes within the EAC.

Uganda produces 2.5bn litres of milk annually. At least 144 million litres are sold in Kenya every year, according to industry estimates. Kenyan companies like Fresh Dairy & Brookside are big processors of milk exported there. 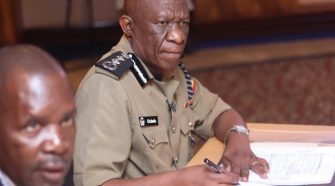