Following a terror attack at a hotel complex in Nairobi, Kenya on Tuesday, Police in Uganda say they have intensified security to protect the country from similar incidents.

The deadly attack happened at Dusit D2 Hotel along 14 Riverside Drive in Nairobi, a building which houses several offices and hotels.

Although they have not yet stated the motive of the attack, Somali Islamic militant group, Al-Shabaab has already claimed responsibility for the attack.

Now, the Police spokesperson, CP Fred Enanga, has in a statement on Wednesday said security is monitoring situation as well as ascertaining whether any Ugandans could have been affected in the attack.

Authorities in Kenya have already confirmed that at least 14 people lost lives and all the attackers had been eliminated.

“We extend our deepest sympathies to those impacted by this tragedy and in addition, we do honour the bravery and courage exhibited by the Kenyan Security Forces after they eliminated the 4 terrorists who participated in the attack,” Enanga said.

“We are meanwhile working closely with our counterparts to verify whether any Ugandan citizens could have been affected by the incident, and advise those planning to travel to Nairobi or other areas to contact security and their travel agencies for further guidance,” he added.

He said Police has already employed stringent measures to curtail any threats of terrorism against Uganda.

“And although there are no specific threats to our country, we do reaffirm our commitment to tackling terrorism and have raised our security level of activities amidst a wider range of interventions, that will enable us reduce further the risks to the public,” he explained.

Police has also said it is working closely with our counterparts to verify whether any Ugandan citizens could have been affected by the incident, and advise those planning to travel to Nairobi or other areas to contact security and their travel agencies for further guidance.

Enanga has further asked the public to remain vigilant about security and report any concerns to security, saying “everyone has a role to play in confronting terrorism”.

Kenya borders Uganda to the East and handles most of her imports and exports and both countries contributed to AMISOM peace keeping forces battling Al-Shabaab militants in Somalia.

In July 2010, Al-Shabaab claimed responsibility for the bombings carried out against crowds watching a screening of the 2010 FIFA World Cup Final match at two locations in Kampala, killing 74 people. 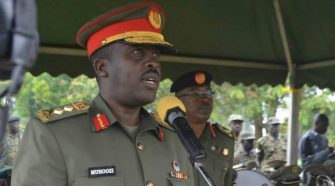