Following the shooting of Ugandans Byarushanga Job and Tuhirirwe Bosco by Rwanda’s security personnel on Sunday morning at the Uganda-Rwanda border, government of Uganda has come out to protest the incident on grounds that the allegation fronted by Rwanda does not justify the killing.

Authorities in Rwanda have since come out to say that the duo were suspects intercepted by Rwanda’s Police after crossing inside Rwandan territory and an ungazetted border point with Uganda. They referred to the ordinary Ugandans who live at the common countryside border as smugglers.

They said: “The smugglers became violent and assaulted police officers who reacted in self defense shooting dead two while the rest escaped.”

In a statement by Government spokesperson, Ofwono Opondo, Ugandan government has Tuesday issued a protest to the Government of Rwanda, in regards to shootings by Rwandan Security Personnel that continue to occur along the common shared Uganda-Rwanda border.

“The Government of Uganda protests in the strongest terms the murder of its nationals by Rwandan security personnel for allegedly being involved in smuggling of goods across the common border. The alleged crime cannot justify the high handed and criminal act by the Rwandan security personnel, against unarmed civilians residing along the common border,” reads the statement in part.

On Tuesday, the two bodies were handed over to the Ugandan authorities and Kigezi region police spokesperson, Elly Matte said that on re-examination of the bodies after receiving them, it was established that the shooting was done at short range with intent to kill.

Read More: Rwanda Hands Over Bodies of 2 Ugandans Who Were Killed By Rwandan Security

“On receipt of the bodies and on re-examining them by the Regional Police surgeon, Ebyarishanga Job had been shot in the chest and head and Tuhirwe John Bosco in the chest and ribs,” reads Matte’s statement in parts.

He said both shootings were done at short range meant to kill in execution style by a gun most likely a pistol.

As such, Kampala says that the murders are inimical to the ongoing efforts to improve relations between the two countries.

“The Ministry demands that a joint investigation in the murders be conducted and the perpetrators held accountable,” writes Opondo.

A number of commentators have since regarded as unconvincing a narrative by Rwandan police of unarmed individual turning violent and assaulted the armed security personnel.

The government spokesperson also raised concerns of other shootings by the Rwandan security which have happened in the recent weeks and months including an incident in which a Rwandan national was shot and severely wounded on Rwandan territory, while returning from Uganda territory and was forced to flee back to Uganda.

“On Monday 4th November 2019, at about 1930hrs at Rushaki B Cell, Karujanga Parish, Rubaya Sub-county, Kabale district, a one Peter Havugimana 28 years, resident of Kabaya village (Omudugudu), Gishari Parish (Akagari) Rubaya Sub-county (Omurengye) in Gicumbi District (Akarere), a Rwandan national was received after being shot in the shoulder from about 200 metres in Rwanda, on the border with Uganda,” writes Opondo

“The victim was shot while carrying about ten (10) kilograms of potatoes from Uganda into Rwanda. After the shooting, he ran back into Uganda territory for his safety. The victim was rushed to Katuna Police Station and thereafter referred to Katuna Community Clinic for further management,” he adds

He says at the Clinic, a bullet was removed from his body and the victim is now in stable condition.

“The Government of Uganda considers the shooting incident a grave matter and that although the latest victim is Rwandan, it constitutes a pattern of reckless and high-handed acts on the part of Rwanda security personnel, against simple, ordinary people that live along the common border,” he says.

He explains that Government of Uganda is ready to hand Peter Havugimana to the relevant Rwanda Government authorities, if he wishes to return.

The Rwandan man identified as Nayizimana Olivier in company of another Rwandan was carrying bananas from Uganda.

Also Read: Rwanda Military Shoot at Rwandans Who Were Carrying Bananas from Uganda

The two met Rwandan Defence Forces (RDF) who tried to stop them.The civilians refused to stop and instead dropped the bananas and ran back towards the Ugandan border. In the process, the Rwandan soldiers shot and injured one in the right arm.

Asked why they refused to stop, the two men explained they feared for their life.

Also Read: Rwandan Pregnant Woman Dies in Uganda After She Was Pursued by Rwandan Security 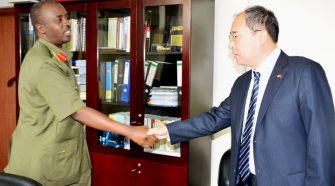