Uganda’s Minister of State for Foreign Affairs, Okello Oryem has revealed that Uganda is willing to offer asylum to the deposed Sudanese President, Omar al-Bashir in case he seeks it.

Omar al-Bashir who has ruled Sudan for three decades  was over thrown by the military on Thursday after almost four months of protests calling for an end to his dictatorship.

General Awad Ibn Auf had initially taken over as the head of the military council, but he resigned just a day later amid a public outcry, with protesters saying he was too close to the deposed leader.

The military council will rule the country for up to two years until elections.

On Tuesday, Uganda’s State Minister for Foreign Affairs, Oryem said that Uganda is in touch with the leadership of the African Union (AU) and is watching carefully the situation in Sudan.

He said this while speaking to journalists after meeting legislators sitting on the Parliamentary committee on Foreign Affairs were he had appeared to defend the Ministry’s policy statement.

“The government of Uganda is monitoring the situation in Sudan and we hope that the Sudanese people will determine the future of their country in whatever form of government they desire,” Oryem said.

He added, “What is important to Uganda is resolution of the transition period in Sudan which is peaceful to the people of Sudan and the neighbours and we hope that Sudan will continue being intact as one country and not fall apart because of problem”.

Oryem added that, “If Bashir asks for Asylum in Uganda, that is a matter that can be considered by Government because he was a co-guarantor of the peace agreement of South Sudan and we must give him credit for that”.

Bashir is wanted by the International Criminal Court (ICC) to respond to cases of crime against humanity that he is believed to have committed as President of Sudan during the violence in Darfur in which an estimated 400,000 people died.

He was first indicted by the ICC in 2009 on war crimes charges over a long-running conflict in Darfur, but has escaped arrest. In 2010, the court issued another warrant of arrest on allegations that he masterminded a genocide in Darfur.

Despite a request to state parties to the Rome Statute of ICC to have him arrested and handed over to the international court, countries like Uganda, South Africa, Ethiopia and Djibouti have hosted him and refused to effect the arrest.

In 2015, asked whether he would order the arrest of Bashir if he ever set foot in Uganda, President Yoweri Museveni told reporters: “Those are not the ways of Africans. I cannot arrest a person I have invited”.

During his independence speech in 2014, Museveni castigated the ICC for its prosecution of Kenyan President, Uhuru Kenyatta over his alleged role in the 2007 post-election violence in Kenya, describing it as “an instrument of post-colonial hegemony”.

Bashir later attended the swearing-in ceremony of President Museveni in 2016 and even then, the Ugandan government could not have him arrested. Bashir’s last visit to Uganda was in November 2017 for two days during which he held bilateral talks with Museveni and also visited his (Museveni) Kisozi farm where Museveni was pictured personally driving his guest around the ranch. 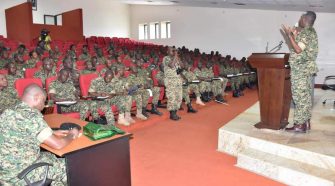