Twenty six days after the signing of a peace pact between the Presidents of Uganda and Rwanda in Angola, the first meeting on the implementation of the resolutions aimed at resolving ongoing disputes between the two nations, is due for Monday in Kigali, Rwanda.

On August 21, President Yoweri Museveni of Uganda and his Rwandan counterpart, Paul Kagame signed a peace pact committing that both countries will respect the sovereignty of each other and of the neighboring countries.

The pact was signed in Luanda, Angola, following months of frosty relations between Uganda and Rwanda.

On Monday, Rwanda’s Minister of State in charge of East African Community, Olivier Nduhungirehe said: “Today, the first meeting of the Ad Hoc Commission on the implementation of the Luanda MoU between Rwanda and Uganda will be held in Kigali”.

He said the opening ceremony will be attended by the Minister of External Relations of Angola and the Deputy PM/Minister of Interior of DRC.

Today, the first meeting of the Ad Hoc Commission on the implementation of the #Luanda MoU between #Rwanda and #Uganda will be held in #Kigali. The opening ceremony will be attended by the Minister of External Relations of #Angola and the Deputy PM/Minister of Interior of #DRC. pic.twitter.com/YoHxd3NyyC

Hon. Sam K. Kutesa, Min.@UgandaMFA leads #Uganda's Delegation in the first Meeting as per the Joint Ad-hoc Commission set up to implement the MoU signed by Presidents @KagutaMuseveni and @PaulKagame last month in #Angola,Luanda to normalise relations between both countries
???? pic.twitter.com/8L837txn83

Ambassador Nduhungirehe will be leading the Rwandan delegation while the Ugandan side is led by Foreign Affairs Minister, Sam Kutesa.

Last week, the Ugandan government spokesperson, Ofwono Opondo revealed that Kutesa would be leading Uganda’s delegation to the first meeting with Rwanda as per the recent Luanda memorandum of understanding.

As part of the MoU, the Ad Hoc Committee for the implementation of the MoU would be headed by the Ministers of Foreign Affairs and composed of the Ministers responsible for international Administration and the Heads of Intelligence of both countries.

Facilitators of the process will keep appraised by Uganda and Rwanda in the implementation of the MoU.

Starting Shortly: #Rwanda – #Uganda discussions on the implementation of the #Luanda MoU to commence shortly at @RwandaMFA. The hosts' delegation is led by the Minister of State for Foreign Affairs @onduhungirehe while the Uganda side is led by Foreign Affairs Min. Sam Kutesa. pic.twitter.com/mvULsg9U1b

After the signing of the peace pact last month, President Museveni said: “We have agreed on a raft of issues that will be implemented between our two countries, largely meant to improve our security, trade, and political relations. Uganda is fully committed to enforcing this agreement”.

In February this year, Rwanda closed its main border with Uganda at Katuna and blocked cargo from crossing into its territory causing a customs crisis.

Since then, there have been accusations and counter accusations between Kampala and Kigali mostly relating to security.

In the MoU, the two Heads of State of Uganda and Rwanda undertook to respect the sovereignty of each other and of the neighboring countries.

Kagame also committed to resume as soon as possible the cross-border activities between both countries including the movement of persons and goods for the development and improvement of the lives of their populations. 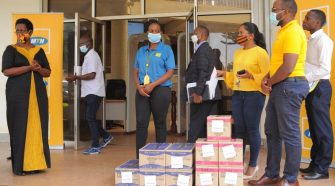 Our Reporter 7 days ago