Government of Uganda has in the latest move to solve the impasse at the the Uganda-Rwanda border points, moved to engage the Kigali administration to establish why cargo trucks from Uganda have been denied access to Rwanda, as well as deliberate prevention by Rwandan authorities of its citizens from accessing Uganda.

The standoff started on Wednesday evening when several vehicles from Uganda were blocked by Rwandan authorities from crossing to Rwanda over claims of construction works taking place at the Katuna border.

Rwanda said that all trucks carrying heavy cargo were to be diverted to other border crossing points (Kagitumba and Mirama hills) and that the move was “in a bid to expedite the construction works currently taking place at Gatuna border posts that are aimed at extending smooth flow of goods and services at the border post.”

However, on Thursday, the Ugandan government through its spokesperson, Ofwono Opondo, told the country that not only Katuna border had been blocked, but also, all other crossing points including Mirama hills where they (Rwanda) were channelling the cargo trucks and that Rwandan Authorities had as well, prevented their school children who study in Uganda on a daily, from crossing the border.

While addressing journalists at the Uganda Media Centre on Friday on the latest developments about the matter, Opondo said that government has invited the Rwanda’s ambassador to Uganda for a discussion about the matter with an aim to forge a way forward.

He said by Friday, only 12 trucks had been allowed into Rwanda after some engagements on Thursday evening with the Rwandan authorities, leaving 129 others stuck at the border.

He says that as it was the case on Wednesday evening, by Friday, passenger vehicles including buses and tourist vans from Rwanda, are stopped and checked from “the other side and Rwandan nationals asked to vacate the vehicles and return to Rwanda.”

What Happened When Rwanda Diverted Ugandan Trucks to Mirama Hills?

“When they advised that this is a temporary closure and asked Uganda to divert traffic to Mirama hills, Uganda complied with that and diverted the trucks since Wednesday night. However, at Mirama hills, there is a blockage, the border is closed and therefore, there is no movement,” Opondo said.

Ugandans and Rwandans meet every Thursday in a market at the Cyanika border to buy and sell goods, but for yesterday’s case, Rwandans were not allowed to bring their merchandise or to come and buy at all, yet the people at the Rwandan border hugely rely on Uganda for their food stuffs and other household essentials, Opondo said.

In a bid to reduce on the effects of losses that the traders would incur as their goods continue being kept at the border, Ugandan government on Thursday pleaded with Rwandan authorities, to allow at least the already arrived trucks access into Rwanda, but neighbours remained adamant.

“Yesterday, the Commissioner of customs of Rwanda came to Katuna border post and we made a request that they allow the 129 trucks that were already in Katuna to go through, so that the rest of the trucks still on transit can be diverted from Ntungamo, they declined this request and so, the 129 trucks are still there,” Opondo said.

Opondo says the Permanent Secretary Ministry of Foreign Affairs has invited the Rwandan ambassador to Uganda, Maj Gen Frank Mugambagye for a meeting on Friday afternoon to “brief us on the official reason for this closure and what they have officially described as temporary diversion”.

He says, from the interaction, Uganda seeks to have the blockage lifted on grounds that the two countries have common borders that handle people and goods. The government also seeks to understand what Rwanda is doing about the matter before closure of business on Friday and having a conversation underscoring the need for normalization of activities at the common borders (Katuna, Kagitumba, Cyanika and Mirama hills).

Olive Wokheka, Uganda’s ambassador to Rwanda, has also been asked to go to the ministry of foreign affairs of Rwanda in Kigali to as well, seek explanation into the matter.

Since Wednesday, several people especially from Rwanda, have been on social media fronting several reasons for the possible cause of the blockage of the borders, saying that it is in response to the alleged arrests of scores of Rwandan nationals in Uganda by security.

However, Opondo dismisses the claims, saying Uganda has not unlawfully arrested any Rwandan citizens, saying those in Uganda continue living normally as always.

“To the best of our knowledge, there is no Rwandan in Police custody outside the jurisdiction of the law and if there is one, he/she has been processed through the police and Judicial system,” he said.

“There is no Rwandan citizen who is being held in Uganda’s prisons on political reasons whatsoever. If there is anybody who knows such a person, we will be glad if that information is shared with Uganda, so that we find out his identity and who is holding him,” he added before saying that Uganda has no intentions of witch-hunting as well as harassing any Rwandan citizens who are living and having various activities in the country.

Meanwhile, Uganda’s Prime Minister, Dr Ruhakana Rugunda on Thursday told Parliament that he will be informing the house on the developments into the matter on Monday.

Also, Government Spokesperson, Ofwono Opondo on Friday revealed that he will brief the nation on the outcome of the engagement between Rwandan ambassador and the ministry of foreign affairs. We are closely following the matter. 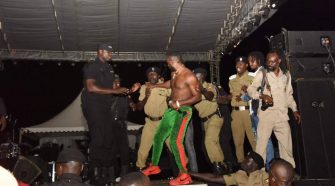