Uganda has become the first country in the World to carry out compassionate Ebola vaccination without facing an active Ebola outbreak, when it administered the vaccine to over 4,000 health-care workers.

According to a statement from the Ministry of Health, workers near the Democratic Republic of Congo (DRC) have been considered first.

“A total of 4,420 healthcare workers and frontline workers have been vaccinated against the Ebola Virus Disease (EVD) using the Ebola rvsv Vaccine in high 13 risk districts bordering Democratic Republic of Congo at 165 health facilities and 15 Points of entry (PoE),” Dr Henry Mwebesa, the Acting Director General Health Services in the Ministry of Health said in the statement.

The exercise which was carried out in eight phases, is intended to protect healthcare workers against the deadly Ebola-Zaire virus strain that is circulating in several parts of DRC.

The administered vaccine protects vaccinated individuals up to 95% for one year.

Ebola outbreak was confirmed in DRC in August last year and 553 health-care workers have succumbed to the virus out of the 817 confirmed cases.

No case of Ebola outbreak has been confirmed in Uganda so far, but government says an extra 1,170 doses of the Ebola-rVSV vaccine have been stocked at National Medical Stores for rapid use in case an Ebola case is detected in Uganda. 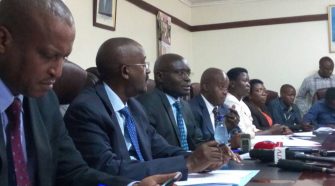 E.C: What Happened in Arua Should Never Reoccur