Uganda’s customs authorities have asked their counterparts in Rwanda to allow the clogged up cargo traffic at Katuna border post entry into Rwanda as the impact of the border closure continues to bite hard.

For four days, the Uganda – Rwanda border point at Katuna has been closed to all trucks carrying cargo, by Rwanda Revenue Authority (RRA). Rwanda’s tax body said last week that the closure was intended to “expedite the construction works currently taking place at Gatuna”.

In a letter addressed to her Ugandan counterpart, Rwanda’s Commissioner for Customs, Uwamariya Rosine said the trucks should instead use the alternative routes of Kagitumba and Mirama hills.

However, Uganda Revenue Authority (URA) has expressed concern over the short notice on which Rwanda took the decision that has now frustrated efforts towards trade facilitation within the East African region. Uganda is also concerned that the decision was taken unilaterally yet it bears serious economic consequences on different regional countries.

In a letter dated March 2 to his Rwandan counterpart, URA’s Commissioner for Customs, Dicksons Kateshumbwa wrote that “whereas the rationale and spirit behind the decision is appreciated, it would have been more appropriate to undertake the measure as a joint decision considering the fact that the affected borders are OSPBs where either side is interdependent on the other”.

He added that “a decision of this nature would ideally give ample time to the stakeholders to enable adjustments to be done so as to comply and in the case of customs to rationalize manpower so that we facilitate trade smoothly” which however wasn’t done.

“In this particular case, the implementation of the decision was done on the very day of notification”.

Some of the goods are perishables such as mangoes, cassava among others, said Kateshumbwa.

He said that cargo consigned via Katuna including cargo cleared under the Single Customs Territory had already arrived and for some, the Customs clearance procedures had been finalized.

There are an additional 17 Kenyan registered trucks carrying petroleum products all parked in the middle of the two OSBPs at Katuna.

“Therefore considering the potential risk of these highly inflammable products as well as the potential deterioration of value in the case of perishables, it is prudent that we take steps to unclog the border by facilitating the consignments that are already at the border having arrived before the notice.” Uganda’s Commissioner for Customs said in the letter.

“It is practically impossible for the trucks to turn back from their positions at the border given that the entire border is chocked and there is virtually no space to maneuver,” he added.

A similar request (to allow entry to the cargo already at Katuna) was made by URA on the very day the closure was effected, four days ago, but Rwanda has since not given positive response.

URA says if not managed, the stalemate at Katuna has and will continue to increase the cost of doing business not only for the two countries but also for other partner states whose cargo is among. This will also affect the revenues, URA said.

“Commissioner, as we have always bilaterally engaged and resolved Customs related issues between our countries, I request your cooperation in supporting my proposal to facilitate the already existing cargo at the border so that we unclog the station as we divert the rest of the outward and inward cargo to Mirama hills and Kagitumba respectively,” Kateshumbwa added.

Last week, the government spokesperson, Ofwono Opondo told reporters that the government was engaging the Rwandan government to have the impasse resolved. However these efforts are yet to yield positive results. 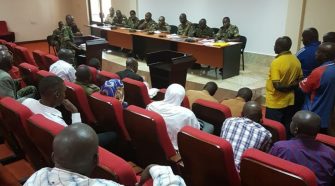