It looks like 2018 is no ordinary year for Uganda as her nationals continue to shine on the global arena. They have been shortlisted in the most prestigious international and continental awards, while others have gone ahead to win them.

It started with the Uganda Cranes qualifying for a second back to back AFCON final tournament, before team captain was nominated among the best African player of the year award. Two weeks ago, singer Bebe Cool, won the Male Artist of the year in East Africa in the AFFRIMA Awards.

The most recent is the nomination of miss Uganda Quinn Abenakyo, among the top 30 in the world and subsequently being crowned Miss world Africa as well as finishing number 3 in the World.

Yesterday, Uganda’s name was in international press again after writer and poet, Harriet Anena was declared winner of the Wole Soyinka Prize for Literature in Africa, at the Muson Centre, Onikan in Lagos Nigeria.

It is a Pan-African writing prize awarded after every two years to the best literally work produced by an African. It was established in 2005 by Lumina foundation in honour of Africa’s first Nobel Laureate in literature, Wole Soyinka.

Anena’s poetry collection, ‘Nation in Labour’ describes Uganda as a beautiful country that has been entangled in political conflict since acquiring Independence in 1962, which has consequently caused her citizens ‘labour pains’.

Published in 2015, the collection is her debut book which explores the experiences she encountered as a child who lived through the LRA insurgency in northern Uganda and the post-war period.

Anena’s collection of poetry warns society about its warped value system through a disciplined use of satiric responses that resonate. Each part of the treatise soaks our dessicated humanity in fluid cadences.

A total of 110 works of poetry were submitted this year from 11 countries in Africa out of which only two made it to the top.

Harriet’s ‘Nation in Labour’ and Nigerian writer Prof. Tanure Ojaide’s ‘Songs of Myself’ were jointly selected as the most outstanding by a jury of international literally figures, thus sharing the top prize.

After being declared winner, Anena couldn’t hide her excitement, she took to Twitter and said she was “Super happy”.

“Super happy to be the joint winner of the Wole Soyinka Prize for Literature in Africa, 2018, for my book A Nation in Labour,” Anena tweeted.

She is the first Ugandan writer to bag this prize and used the event to rub shoulders with Wole Soyinka himself, who handed over the Shs 37 million prize.

Anena who currently works with the African Centre for Media Excellence (ACME) as the Special Projects Officer was formerly a journalist with the Daily Monitor.

Her passion for writing goes way back to her childhood. Anena wrote her first poem, “The plight of the Acholi child”, in 2003 and it won a writing competition organised by the Acholi Religious Leaders Peace Initiative, helping her secure her a bursary for A-Level education.

She attended the 2013 Caine Prize workshop held in Uganda, and her story “Watchdog Games” was published in the anthology ‘A Memory This Size and Other Stories: The Caine Prize for African Writing 2013’. In 2013, she was shortlisted for the “Ghana Poetry prize” for her poem “We arise”. 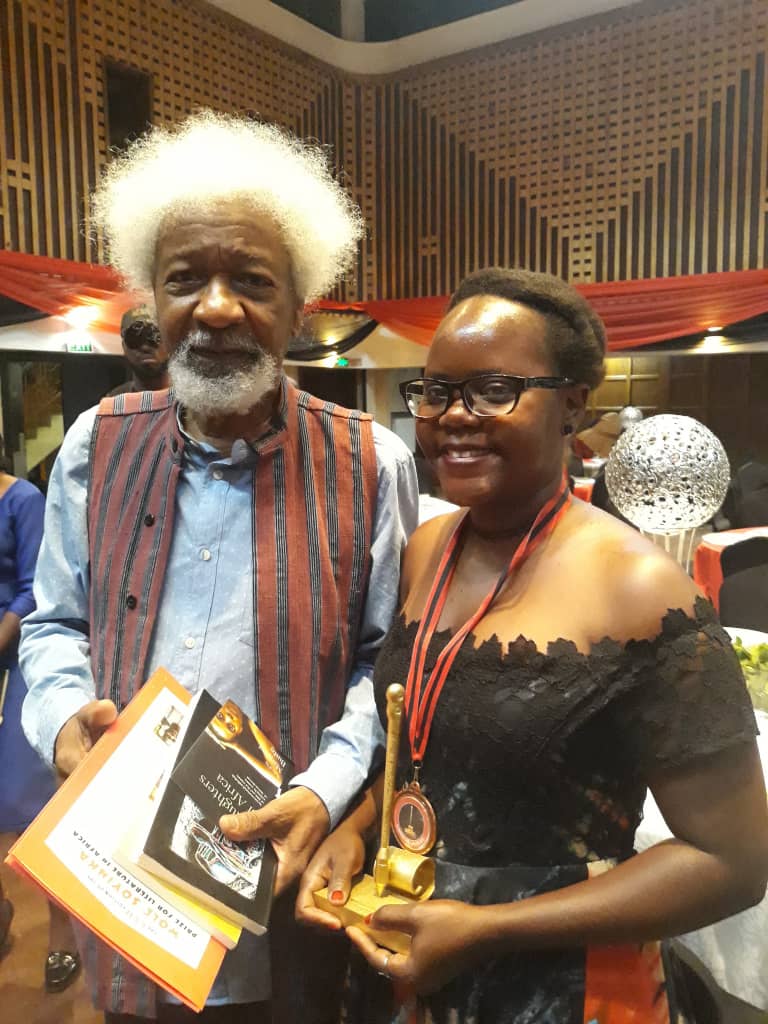