A Ugandan male adult who was recently reported missing has Thursday morning been handed back to Uganda by Rwandan authorities who had arrested him on no charge.

Tugumisirize Obedi Nicholas disappeared on May 25 when he left his home in Kitojo Cell along the Uganda-Rwanda border in Kabale district to the garden in the same area and never returned. His relatives would later report a case of disappearance under Police file CRB 546/2020 but the search by police had since not made any headway.

On Thursday morning at around 8am, according to Elly Matte, the Kigezi region police spokesperson, the victim resurfaced in the hands of Rwandan immigration officers of Gatuna border post who handed him to their Ugandan counterparts at Katuna immigration office.

Rwanda had not formally informed Uganda of arresting and being in possession of the Ugandan citizen.

Matte says on interrogation, the victim claims he was told he was arrested on suspicion of being a smuggler but when interrogated, he was released after finding out that he was innocent.

“When we interrogated him, he said he was arrested by security officers clad in military fatigue, taken to different police stations in Rwanda including Cumba and Kagyeyo on suspicion that he was a smuggler at the border. But when he was interrogated, they found that he was innocent and that is why he was today handed over back to Ugandan authorities,” Matte told this news website.

Asked what reason was contained in the deportation papers and the official reason Rwanda gave for arresting the victim, Matte said, he was not privy to that information but instead referred to immigration authorities at Katuna.

When contacted, Ms Karashani, one of the officials at the Immigration office of Uganda at Katuna admitted receiving the victim but objected delving into details.

“Yes we received him but I can not give that information, I don’t give information like that, you ask the Public Relations Officer of the Ministry of Internal Affairs,” she said.

Our efforts to reach officials from the Ministry of Internal Affairs were futile since they could not pick our repeated calls.

Meanwhile, due to the ongoing coronavirus global pandemic, the victim has been put under quarantine at Kabale hospital for further management.

Last month, Rwanda also deported 13 Ugandans who had been in detention in Nyagatare Prison. The 13 individuals, all male, were deported through Mirama Hills in Ntungamo District and were received by the RDC of Ntungamo district.

The Ugandans had at separate times entered Rwanda some time back through the two countries before the existing lockdown to do petty businesses like selling the much needed food items in Rwanda but were arrested on account of illegal entry and detained. 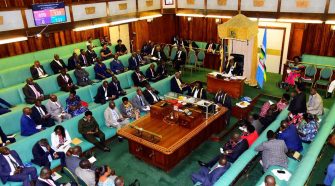 Parliament to Carry On with Business Due to Budgetary Process, Plenary Moved to Bigger Space