A section of Ugandan Members of Parliament have faulted the Zimbabwean President Robert Mugabe for the move by the Zimbabwe military to take over power.

The Minister of State for Urban Development who is also Buzaya county MP, Isaac Isanga Musumba said that President Mugabe needed to be sensitive to the population he has been leading since some of the people were a generation of liberation from colonial rule.

“Mzee Mugabe needed to be careful and sensitive on how to handle the generation of people that fought for the liberation of their country; Mugabe had to balance the politics, the needs and aspirations of the people who made sacrifice and those that were born after the sacrifice,” Musumba said.

The MP for Busiro East Medard Ssegona said that it was unnecessary for the military to take over when they have been part of the group running down the country.

Ssegona stated that as an instrumental figure in the African Union, Mugabe should be advised by the continental body to step aside to allow a new government to access power peacefully.

“There should be no semblance of democracy, let the Zimbabweans sit down and guarantee his safety after leaving power; let the man concede that he is messy and leave power,” Ssegona said.

Kampala Central lawmaker, Mohammad Nsereko noted that what is taking place in Zimbabwe should serve as a learning lesson to other African leaders who use the state sovereignty to man the state institutions as own properties.

“Mugabe is the best example to African leaders who want to overstay in power, he had turned Zimbabwe into his home and every institution into his property but today the game is over,” Nsereko said.

Mugabe now aged 93, has dominated the impoverished country’s political scene since independence (1980) from the UK. His health has detoriated in recent years with critics accusing his wife Grace of usurping the presidential powers.
The military has seized control in Zimbabwe but has said President Robert Mugabe is safe. 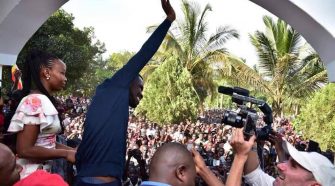 My Fight for Freedom Will Continue, Bobi Wine Vows on Return