The two talented youngsters were declared the winners during the finale of the competition on Sunday. They won the USD 50,000 cash prize which is equivalent to Shs 183m.

Many believe Uganda dominated the TV competition since it launched a few months ago.

Little wonder, Dance Alliance Network (DNA), Esther and Ezekiel, as well as Jehovah Shalom Acappella, all Ugandan groups, made it to the finale.

They were up against Kenya’s Jannell Tamara and Spellcast and a Rwandan cultural troupe named ‘Intayoberana’.

DNA were the viewers’ choice at the third and final semi-final and were sent straight to the finals after receiving most votes.

Ester and Ezekiel are siblings and born to Ugandan gospel songstress, Julie Mutesasira. Ezekiel is 11 years while Esther is 14.

They first woowed all the three judges when they sang Leonard Cohen’s “Hallelujah”. A few seconds into their performance, the audience had already burst into applause.

When asked what he plans to use the money for upon winning East Africa’s Got Talent, this is what Ezekiel said: “I will first give tithe to God, build a home for the disabled and orphaned  children and use the remaining money to process the required travel documents to Canada. I want to visit my mother.”

The 11-year-old currently in primary four at Hormisdallen School, Kamwokya.

East Africa’s Got Talent is a talent show competition that is part of the Got Talent franchise owned by Simon Cowell. Season one was produced by South African film production company Rapid Blue, and was broadcast simultaneously across four countries in East Africa; Kenya, Tanzania, Uganda and Rwanda.

The programme showcases a variety of talents from people of all ages from East Africa, with acts ranging from singing, dancing, comedy, magic, juggling, stunts and other variety genres.

Each participant who auditioned was hoping to secure a place in the live television finale by impressing a panel of judges and the viewers at home. 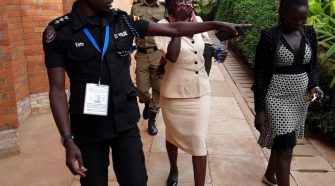