Democratic Party (DP) leader, Norbert Mao has scorned the choice of people recently picked by President Yoweri Museveni as his Advisors, saying it is an example of the poor quality of governance that the political opposition seeks to change.

President Museveni recently appointed local singers Catherine Kusasira and Mark Bugembe aka Butcherman as well as motor-mouthed female figure, Jennifer Nakanguubi aka Full Figure as his Advisors, in a bid many say seeks to popularize Museveni among the low class citizens and ghetto dwellers within Kampala who have for long been sidelined.

Kusasira will advise the President on Kampala affairs while Butcherman who was formerly in Bobi Wine’s singing group will advise on matters to do with the ghetto which he represents.

Political analysts view Butcherman’s appointment as a move aimed at countering Bobi Wine, a self-proclaimed Ghetto President who intends to run against Museveni for Presidency in 2021.

Commenting on the matter while in Mbarara this week, DP’s President General, Norbert Mao expressed disappointment in Museveni’s choice of Advisors, saying it shows how he (Museveni) is desperate to rule at the expense of the quality of the leadership he surrounds himself with.

Mao says political parties ought to have a process through which they sieve the best possible leaders.

“Democracy cannot just be about elections where everybody goes to the electorate to do whatever they can to get elected even when you are recruiting,” Mao said at a news conference in Mbarara.

“Under the NRM, now particularly in this last minute when Museveni is so desperate to rule for life, he no longer cares about quality”.

“He goes to a lady called Catherine Kusasira and says ‘Now you are the senior presidential advisor’, gives her a four-wheel drive V8 car, gives her gives her VIP protection. Now, she is rubbishing leaders in Kampala telling them to write to her officially to seek an appointment to meet her”.

She added that her appointment was because the President realized that the party leaders had slept on the job.

“You see a man called Butcherman who is now spitting fire on behalf of the President. Then he (Museveni) gets a lady called Full Figure who spews out obscenity. And this Sipapa who was one time almost shot dead while attempting to rob somebody in Kololo,” Mao went on to comment.

“We lament the decline in quality of leadership. When we say we want to take back our country, we want to be led by the best possible people,” he added.

This as Democratic Party held consultations in Mbarara as the party plans to formulate its manifesto ahead of the 2021 general elections.

According to the DP President the cornerstone of the DP manifesto is to ensure human security as opposed to state security and how to unpack  a number of social policies for instance to have an economic policy which encourages people to save.

“As DP we pledge that we shall ensure human security as opposed to concentrating on state security only”.

“We have discussed the empowerment of women. We pledge new mechanisms to ensure the social, political and economic advancement of women”. 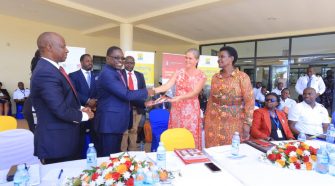