Latest
Facebook Google+ Twitter
0Shares
By Sylver Kyagulanyi
The entertainment or creative arts industry is as old as humanity. It is one of the ways through which people demonstrate ingenuity and craft to make our lives more beautiful and worthwhile using creative arts, including music, dance, drama, painting, poetry to mention but a few. This naturally broadens the concept of natural resources to include human intellectual capabilities.
In the information age, the greater world has slowly chiseled this ingenuity into a knowledge- based economy that relies on intellectual property rather than agriculture and other traditional economies. The benefits are apparent.

In 2019, the entertainment and information sector in the USA stood at 9.4% as a contribution to the GDP while agriculture accounted for only 0.8%. In the same year , in Nigeria, the entertainment plus the information and communication sector which encompasses, literary publishing, motion pictures, sound recordings, music production and broadcasting contributed 14.79% while the oil sector contributed 9.14% to the country’s GDP.

It is worth noting that the creative arts industry feeds the information and communication sector through literary works, motion pictures, sound recordings, music production and broadcasting as well as the recreation sector.

It is evident from the past actions that Uganda is struggling in understanding the role of creative arts in national development. This is apparent in the current regulations;

These regulations, with several others are drawn from the Stage Plays and Public Entertainment Act cap.49 and the Uganda Communications Act ,2013 respectively.

Reference is made to my article, “Performing arts in Uganda need boost, not restriction” published on the 4 Feb 2019 wherein the issue was similar only this time they were being brought by the Ministry of Gender, Labour and Social Development which Ministry had no such mandate. In the same article I mentioned that the appropriate line ministry would be the Ministry of Information since the permit issuing authority at the time the law was enacted was the Broadcasting Council which was swallowed up by Uganda Communications Commission. It never occurred to me that whoever is interested in this faulty legislation would take the hook, line and sinker approach bringing the same back under the ICT ministry. In fact, the said legislations are worse, careless, inconsiderate, but mostly ignorant.

Since there is no mandatory requirement for consulting the stakeholders, a total of 18 regulations were laid on the floor of Parliament on the 28th May 2020 and now have the force of law.

Generally speaking, the Stage Plays and Public Entertainment Act should have no place in a civilized society and should have been repealed after the enactment of the 1995 Constitution. However, I will go ahead to highlight some of the salient problematic features of the Stage Plays and Public Entertainment Rules and some of the regulations drawn from the Uganda Communications Act:

Under these rules, one must have a permit to stage a play, a concert or any form of public entertainment. Failure to have a permit is punishable by a fine or imprisonment for six months or both.

UCC has wide powers to charge fees for the permits; regulate the content of what is to be performed and on top of the fees for the permits, the applicant has to pay extra money to facilitate the attendance of a UCC officer. Moreover, the UCC inspector has the power to withdraw the permit even when the concert or play is on-going. Denying a UCC officer entry can lead to imprisonment for a year.

The requirements when applying for a permit may include a certificate of censorship issued by the media council. There is also a compulsory requirement for an English translation of every work.

A person cannot advertise a play or concert using any means without authorization from UCC and UCC will not grant authorization if one has not been cleared by a local government entity, e.g. KCCA in Kampala.

Under these regulations a person needs a license to produce a film, motion picture, documentary, commercial still photography and any other content or to engage in the business of film production. Another license is required to broadcast the same on TV, internet or any other channel.

A person while applying for the license will be required to describe all the scenes of the film or documentary; attach a detailed budget showing how much is to be paid to the actors; technicians and other professionals and also attach proof of his/her financial capacity. UCC may also require a bank guarantee or bond.

UCC has powers to monitor the content and confiscate the equipment at their discretion. UCC has power to restrict production of certain content in public interest or content that has no education purpose.

A person cannot advertise without authorization from UCC. A permit is also required to have a film, documentary or commercial photography shown in a cinematograph theatre.

Penalties for the offences under these regulations include imprisonment for one year.

The above regulations are ultra vires, illegal and unconstitutional. They violate the rights of members of the creative industry to earn from their professions as enshrined in Article 40 (2) of the Constitution and they are beyond what is acceptable, and demonstrably justifiable in a free and democratic society.

The author is a musician, lawyer and the Executive Director of the Copyright Institute in Uganda. 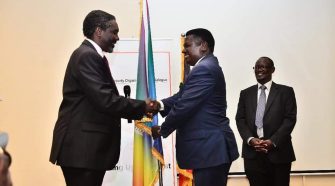