Sub-Saharan Africa is set to enjoy a modest growth uptick with a projected average growth rate of 3.4% in 2018 from 2.8% in 2017, the International Monetary Fund (IMF) indicates.

The Regional Economic Outlook for Sub-Saharan Africa released by IMF on Monday reports that the slow recovery in growth has been largely attributed to a more supportive external environment, including stronger global growth, higher commodity prices and improved market action.

But this can only be said for two thirds of the countries in the region, majority of which are outside the oil exporting countries bracket.

Several economies such as Burkina Faso, Côte d’Ivoire, Ethiopia, Ghana, Guinea, Rwanda, Senegal and Tanzania grew 6% or faster in 2017 and are expected to maintain robust growth over the medium term. These economies are a mix of resource-intensive and non resource-intensive in nature.
Some other 12 economies whose per capita incomes declined in 2017 are projected to witness continued decline this year. IMF says 300 million people will experience negative growth between 2019 and 2022.

Regarding debt levels, IMF says this has continued to rise as many countries including Uganda continue to rely on public investment driven growth using external financing. Countries under debt distress increased to 6 while 9 are at the risk of falling into distress.

“The associated balance sheet weaknesses are limiting the extent of the recovery, as shrinking fiscal space and increasing non performing loans are exacerbating vulnerabilities in many countries,” IMF states in its outlook.

While speaking at the event to launch the report at Sheraton Kampala Hotel, Mira Clara, the IMF Resident Representative in Uganda advised for countries to fully utilize their potential in mobilizing domestic revenue.

“Given these circumstances and the spending needs, the solution should be in widening domestic revenue. There is significant scope to increase revenue especially income taxes,” Clara said.

She added that private sector needs to foster private investment which remains lower compared to Asia, Latin America and Europe.

“This recovery was mainly driven by the good weather. Agriculture grew by 3.2% and services grew significantly. This is in the context of low inflation mostly due to declined food prices,” the IMF Resident Representative added.

However, the current account deficit widened as a result of the high import bill for the ongoing big infrastructure projects as well as the spike in fuel costs.

While she acknowledged that revenue collection has increased since 2013, Clara noted that it is still low compared to regional peers, mainly on VAT and Corporate Income Tax.

She says that Uganda must be careful when preparing its infrastructure projects to ensure the country’s debt remains within the threshold of 50% of GDP.

Uganda is among the 10 countries that have experienced the largest increases in debt stocks between 2013 and 2017. Others are Angola, Benin, Chad, DR Congo, Gabon, Mozambique, Nigeria, Swaziland and Zambia.

Reacting to the Outlook, Prof Elia Hisali, an expert in applied econometrics and fiscal policy said countries must continue to diversify their economies in order to reduce their vulnerabilities.

“In Uganda’s case, we need to increase domestic revenue because experience shows that we can only rely on external funding. If our debt is not managed, private investors are most likely to project an unbearable tax regime in future,” Prof Hisali said. 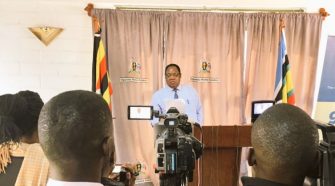