While it is confirmed he died from his home in Bulange, Mengo near Kampala, SoftPower News is yet to establish details regarding the cause of death.

In government, he served in numerous capacities including Minister of Public Service and Minister of Education and Sports.

He was also a distinguished academic. Nsibambi served as the dean of Faculty of Social Science at Makerere University from 1978 until 1983 and from 1985 until 1987.

He was then appointed head of the Department of Political Science at Makerere University in 1987, a position he held until 1990. He was also Director of the Makerere Institute of Social Research from 1994 to 1996.

He would later in 2003 be appointed Chancellor of Makerere, an office he held until 2007.

Many Ugandans are already pouring their grief on social media to express their condolences for the loss.

“I’m saddened to learn of the death of former Prime Minister Prof. Apollo Nsibambi. I convey my condolences to his family and also to all Ugandans. An accomplished academic who transitioned smoothly into the political arena, Nsibambi served with integrity, dignity and class,” Mao tweeted on Tuesday.

Nsibambi was born on October 25, 1940 to Simeon Nsibambi, who together with John E. Church led the Balokole or the “East African Revival” movement. 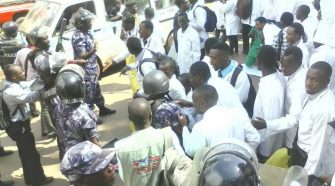