Zimbabwean President, Emmerson Mnangagwa has said the gaining of Independence over five decades ago is what inspired Zimbabwe to also fight colonialism.

The leader of the Southern African country said this Wednesday while speaking at Uganda’s 57th Independence Day celebrations in Sironko district in Eastern Uganda.

President Mnangagwa attended the celebrations on the invitation of his Ugandan counterpart, President Yoweri Museveni.

Mnanangwa who last visited Uganda in 1963 while he was being smuggled out to China for military training, lauded President Museveni for extending to him the invitation.

“Your independence inspired us – that it was possible to remove colonial power from our country,” he added, describing Uganda as Zimbabwe’s “elder brother” given that it attained its Independence 28 years prior to the latter.

“We admire the unity, progress and focus here in Uganda and that you have developed your country in unity and love. We aspire to follow and achieve that”.

He told the multitudes of people gathered at the Sironko district headquarters that Zimbabwe is still a country in transition. Mnanagwa also made reference to the economic strife that Zimbabwe has suffered under the economic sanctions that have been imposed on the country for the last 20 years by the West.

“But because of political support from other African countries including Uganda, we still survive,” he said.

At the same event, President Museveni conferred the most excellent honor of the Pearl of Africa on President Emmerson Mnangagwa.

“When you have a feast and a relative decides to join you in celebrations, that act consolidates the brotherhood and sisterhood,” Museveni said.

“I thank President Mnangagwa for coming to check o n his relatives in the Great Lakes”. 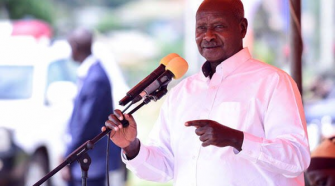 COVID-19 Crisis: Parliament to Pay Tribute to Museveni for Exemplary and Insightful Leadership