Uganda’s Police has condemned the killing of innocent civilians, provocation and abuse of rights by Rwanda’s security agencies a day after a Ugandan national was shot and killed on Ugandan territory by Rwandan security operatives.

On Friday night, a Ugandan identified as Nyesiga Alex was shot and killed by Rwandan soldiers in Rukiga district, Southwestern Uganda.

Police said in a statement that his death followed an incident in which the same soldiers (Rwandan) chased and killed instantly a Rwandan national who had crossed into Uganda.

The Rwandan citizen identified as Peter Nyengye was a businessman who attempted to cross into Rwanda on a a motorcycle loaded with his merchandise but turned back upon noticing security presence across the border, Uganda’s Police spokesperson, CP Fred Enanga said.

“Nyengye was however chased and intercepted by two 2 armed Rwandan soldiers a distance of about 80 meters into Ugandan territory at Hamisavu trading centre, ” Police said.

The victim resisted attempts to arrest him and was shot to the head instantly.

“The armed soldiers in addition shot dead a Ugandan identified as Nyesiga Alex who was trying to intervene”.

After the double murder, the Rwandan soldiers are said to have immediately withdrawn after failed attempts to remove the body of the Rwandan victim.

The two bodies were transferred to Kamwezi health centre IV for postmortem analysis.

Police has condemned the conduct by Rwanda’s security which they say is a violation of human rights. They say the shooting was unwarranted given the several legal methods that should have been explored.

“Police condemns strongly the violent acts of killing innocent civilians with impunity, regardless of their immigration status”.

The Police spokesperson said there was no justification for the illegal entry and use of deadly force by the Rwandan military, due to the presence of alternative, adequate and effective remedies available at our disposal.

Enanga alluded to a recent incident in which the Ugandan security agencies intercepted buses in Kasese district carrying 44 Rwandan nationals who had illegally entered Uganda. He says that even when it was clear these Rwandan nationals were in Uganda illegally, authorities had them deported to Rwandan in a very peaceful manner.

“As we forward the matter to the National Security Committee and Ministry of Foreign Affairs for better management, we would wish to urge our counterparts to respect the rights of citizens along the border and avoid acts of provocation that can easily destabilize the prevailing peace along the border, ” Police said.

The incidents in Rukiga district come at a time when there’s a deepening diplomatic row between Uganda and Rwanda.

In March this year, Police in Rwanda shot a male Rwandan citizen as he attempted to cross into Uganda at the Katuna border post.

The incident occurred at Rushaki B Cell, Nyinamuronzi ward in Katuna town council. The victim, Nadayimana Innocent, was shot in the right arm by officers of Rwandan Police unit, Interforce.

It followed a decision by government in Rwanda nationals placing Rwandan nationals under restrictions not to cross into Uganda.

This month, in a brief to the diplomatic corps in Uganda on the status of the Uganda – Rwanda relations, Foreign Minister, Sam Kutesa said Uganda was focused on securing Ugandans’ security.

Kutesa said that in as much as Rwandans are welcome to visit Uganda, they are required to abide by the laws of the land. Anyone who breaks the law will be dealt with in accordance with the law, the Minister said.

The Minister said a number of security operatives have been entering Uganda without following laid down procedures that govern the entry of security personnel into the country. In such cases, he said, a number of those apprehended have been deported back to Rwanda. 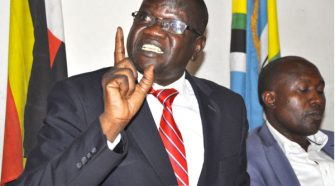 Age Limit Petition: FDC Appeals to Judges’ Panel to Side With Ugandans