Uganda’s public transport will resume effective Thursday after two months of restrictions due to coronavirus. Government has set conditions – that trains, taxis and buses will only carry half their passenger capacity.

President Yoweri Museveni announced during a televised address Monday evening that the limitations on the number of passengers are necessary to allow social distancing.

Hawkers and brokers who often operate in taxi/bus parks as well as bus stops, have been prohibited.

This is part of the gradual reopening of the economy following a lockdown  to slow the spread of the coronavirus.

“With Education, we had thought opening for finalists. We hoped schools would use this time to prepare end of year exams. By allowing only finalists, we hoped that there would be enough space to avoid overcrowding and observe social distance. We needed 2 weeks to prepare for resumption on June 4,” he said.

However, the President said that health experts have advised that government acts cautiously on the issue of children in the education system.

“They said there are still many risks. Finalists are 4 million and we don’t have enough kits for testing those numbers every 2 weeks. We have machines but the problem is reagents. There’s a global shortage in supply,” he said.

Some of the risk areas are the day scholars that oscillate between schools and homes every day as well as school staff and teachers who don’t stay at school. Their movement might spread the disease, he said.

For the other learners stuck at home, he said learning will continue radios, TV and other materials provided by the Ministry of Education.  The President says government is considering procuring radios for the households that lack them as well as procuring two TV sets per village where learners can follow the televised lessons.

“We have decided that we shouldn’t bite too much at the time. Opening for private and public cars even with restrictions has already unleashed a big number of people. Let’s first see the impact of that,” he added.

As such, the reopening of schools to finalists has been postponed for another one month.

Shopping malls have also been allowed to reopen beginning Thursday. They are required to observe social distancing guidelines.

The President said the lockdown was designed to avoid infection, to establish where the danger was coming from and to prepare better, but  he acknowledged it (lockdown) should not continue indefinitely given its impact on the economy and social aspects of life. He says Uganda’s current tally of Covid cases (457) with no single death is proof that the lockdown has been effective.

He also reiterated that the services of truck drivers are indispensable, contrary to public concern that the truckers should be blocked. He urged the public not to panic, saying the strategy of testing all drivers is effective.

“I’m confident that in whatever direction the disease evolves, we can overcome it. We have quite a number of Doctors. We have 4,372 Doctors in public and private hospitals. If necessary, we can mobilize these. We also have 70,000 nurses”. 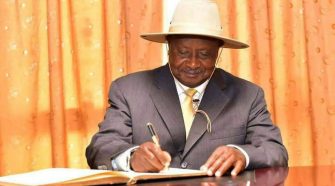