Uganda registered 1.5 million tourist arrivals in the year 2018 representing a 7.4 percent growth from the arrivals registered the previous year, the Ministry of Tourism, Wildlife and Antiquities revealed on Wednesday.

The statistics were announced during the tourism sector review workshop for the year 2018.

According to James Lukwago, the Director of Tourism, Wildlife and Antiquities in the Ministry who presented the figures, the sector created 667,600 jobs in the year under review, representing a 6.7 percent increment.

Funding to the sector which remains the biggest foreign exchange earner has been incremental over the last four years, the biggest increment registered in 2018. Government allocated Shs 118.3bn to tourism compared to Shs 105bn in 2017, Shs 96bn (2016) and Shs 91bn (2015).

Speaking at a workshop held at Hotel Africana, the Minister of Tourism, Prof Kamuntu attributed the growth to intensified marketing of destination Uganda.

“As a result of delivering on our commitment, tourism is now growing steadily and bringing into the country much needed foreign exchange earnings, creating jobs, contributing to GDP and balance of payment”.

He said that the sector has since replaced cash crops like coffee, cotton and tea which traditionally dominated Uganda’s exports.

“Today, tourism has established its profile, credibility and respect as a powerful driver of socioeconomic transformation. And the numbers speak for themselves”.

The Minister however was quick to note that sustained growth of the sector depends on adequate funding. Prof Kamuntu said that for a sector that contributes 7 percent to Uganda’s GDP to get 0.3 percent of the total budget is a mismatch.

Prime Minister, Dr Ruhakana Rugunda who officiated at the event said that in order to promote community-led conservation, government has ensured that it shares revenue generated from tourists with communities surrounding the national parks.

He also said that infrastructure has been improved to ease connectivity to the different attractions, the latest development being the revival of the national carrier, Uganda Airlines.

In an interview with SoftPower News, Lily Ajarova, the chief executive of Uganda Tourism Board (UTB) said that the growth in tourist numbers is due to the improved marketing of Uganda over the years.

“In tourism, if you put up a campaign, the results might be yielded after some time. Clearly we can see that the efforts in marketing of destination Uganda are paying off,” Ajarova said.

“We have have consistently maintained the presence of Uganda in key markets. We have contracted market destination representatives in source markets. And we think all that is getting the numbers higher”.

Government has set out an ambitious target to grow tourist arrivals to 4 million people by the year 2020, but some says this might not be achievable going by the current trends. However, Ajarova says it is achievable.

“It is achievable. There has always been the different understanding of a tourist. When we talk of the 4 million, we are talking of business tourists, leisure, those visiting friends and family”.

However, the sector still grapples with challenges like poaching, encroachment on wildlife habitat, lack of product diversity, inadequate data management and research as well as negative travel advisories. 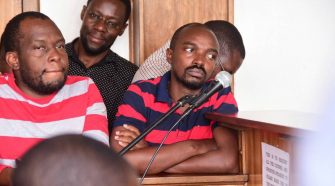 Red Pepper Directors, Editors back in court for bail hearing