Uganda dropped seven places to 122 in the business environment rankings conducted by World Bank in 190 economies across the world. The rankings are based on the reforms made by different countries in a one year period from June 2016 to June 2017.

In the period under review, the index indicates that Uganda only introduced one reform relating to cross border trade within the East African Community.

“Uganda reduced the time for export documentary compliance and border compliance by allowing for electronic documents submission and processing of certificates of origin and further developing the Malaba one-stop border post,” the Doing Business index indicated.

Asked to explain the causes of the not so impressive performance, Joseph Kiggundu the Director of the One Stop Centre at UIA said that the index did not capture the ‘significant’ reforms undertaken by Uganda because they have not been aggressively communicated to the business community in the country.

He attributed this to inadequate funding required by UIA to adequately communicate its innovations and the the media for not playing its role.

“We lost out in some of the reforms we did including the One Stop Centre (OSC) for business registration yet it is among the biggest in the region. We have about 10 institutions all housed under the (OSC) better than any other country in East Africa,” Kiggundu told SoftPower News on Wednesday.

He further pointed out the automation of most of the services on a web portal online which he said should have improved Uganda’s ranking significantly.

“It is unfortunate that these business reforms were not captured and that’s why we lost. We must publicize government doing business reforms or else our ranking will continue to drop,” Kiggundu said.

“This is not only our part but the press has to do their role,” he added.

In assessing the business environment, World Bank interviews investors (both local and foreign) in a particular country to ascertain the the ease or difficulty they encounter in conducting business. Therefore, the performance of a country rests on how much the business people are informed.

Unlike countries like Rwanda and Kenya which he said have adopted an aggressive approach on marketing themselves, “government in Uganda is still lagging and must put enough money”.

He said that until these new services are communicated, Ugandan businesses will continue to respond negatively to these surveys and the rating will go down.

“It goes back to funding. Across government, agencies are only getting 2% in the comprehensive release of budget they receive yet World Bank recommends that 15% to 20% should be on communicating.”

On her part, the UIA Executive Director Jolly Kaguhangire partly attributed Uganda’s decline to a hike in trading license fees but was quick to add that many other positive reforms had been undertaken.

“The World Bank index should not worry anyone. What matters is what is happening on ground. Things are going on well and many reforms have been done,” she said.

Kaguhangire too commented on the issue of publicity saying; “We do so much but our communication is still low.”

She appealed to the press to contribute towards publicizing the innovations that have been rolled out noting that promoting Uganda as an investment destination benefits everyone.

Basil Ajer, the Director of the Small and Medium Enterprises (SMEs) Division at Uganda Investment Authority said that for entities like URA and commercial banks which have intensified communication on their products, good results have been reflected in the Doing Business indicators. 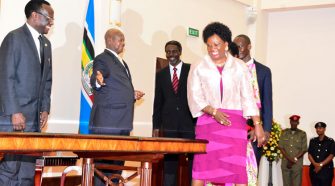