As tension continues to rise between the UIA Executive Director and the Board of Directors at the Authority, the Minister of Finance, Matia Kasaija has now been sucked in to resolve the stalemate.

The Board Chairman of the Uganda Investment Authority (UIA), Dr Emeley Kugonza has written to Minister Kasaija who is the supervising Minister for UIA reporting the refusal of Jolly Kaguhangire, the Executive Director to step down from office as ordered by the Board.

The standoff stems from a meeting convened by the Board on Tuesday this week in which meeting a decision was arrived at to interdict Kaguhangire.

The Board interdicted her for reasons that include among others corruption, abuse of office, insubordination, lying to the Board and closure of the UIA office in Namanve industrial park without notifying authorities.

But Kaguhangire defied the interdiction and downplayed it as illegal claiming the requisite procedure was flouted. She said the Board meeting lacked quorum and that the issue of her interdiction had not been drawn on the Agenda as required by procedure.

She wrote back to the Board Chairman stating that she was not going to comply with the decision.

The following day, Kaguhangire summoned a staff meeting which upon learning of, Dr Kugonza quickly notified all members of staff at UIA to boycott. He said Kaguhangire had lost her position as E.D and thus had no powers to call a meeting.

Now, Kugonza has written to Minister Kasaija defending the decision to interdict Kaguhangire. In the letter dated June 28, Kugonza dismisses the claims raised by Kaguhangire in regard to the legality of the decision. He terms her claims as “falsifications and lies”

He says the meeting was well constituted and that the requisite quorum was realized.

“Only 8 board members of the board are required for the board meeting to be quorate,” he said in his letter, adding that “A total of ten board members attended and Mrs. Kaguhangire attended in person and signed as Member 8 on the register for the day”.

As opposed to the claim that one of the Board members had personal conflict with Kaguhangire and thus shouldn’t have participated, Kugonza said such a conflict was not known to the Board.

Kugonza adds that Kaguhangire was present in the said meeting and that the grounds for her interdiction were thoroughly explained to her.

Kugonza told the Minister that Kaguhangire’s refusal to comply with the Board decision had created confusion at the Authority on top of frustrating work.

“Hon Minister, the refusal to vacate and hand over office by Mrs Jolly Kaguhangire has generated a lot of confusion at the Authority and is badly affecting our image as the preferred investment destination country,” Kugonza’s letter stated.

“We humbly seek the intervention of your good office,” he pleaded.

Joseph Biribonwa to Chair NIRA Board

Govt to Withdraw Land from 60 ‘Investors’ in Namanve Industrial Park

New UIA Board Impressed with Progress in Developing Industrial Parks 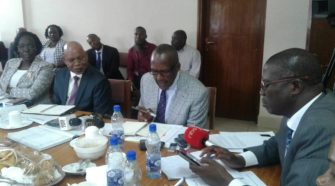