Doreen Faith Namutebi, a Ugandan fashion professional based in the United Kingdom, is set to unveil the plus-size fashion week for Uganda, dubbed the “Figure Bombshell.”

The Figure Bombshell is a movement and revolution which emerged as an idea in 2016 on social media before developing into a platform for pioneering a plus-size market for plus-size women, which is now ready for its official public launch in Uganda.

According to Doreen, the plus-size fashion week is among other things aimed at changing a wrong perception that only the small sized women are worthy for the fashion industry.

The campaign was created to empower, educate and encourage plus-size women in Uganda and beyond to be body confident and feel good about themselves. It also seeks to make ladies embrace the idea that clothes on the catwalk don’t just look good only on slim people but that plus-size women can also look good in the clothes showcased on the catwalks.

“The modelling world and designers in the high-end fashion market particularly from the west (London, Paris, New York) think that clothes still look better on small models, who at times portray an unhealthy image. However, I disagree strongly with their perception because the average size for women is a size 16,” Doreen told SoftPower News.

“This is a size of a relatively big, healthy and of a fuller-figured woman. As someone whose career is based in this industry and with a profound interest for fashion, I felt compelled to create the ‘The Figure Bombshell’ campaign,” she adds.

She says the problem is not just in the Western world where she lives, but also in Uganda.

“Designers or fashion houses here are not using big women to model their clothes yet the typical African woman who would buy their clothes is a big woman. I am a curvy woman too, I have enough of everything; boobs, thighs and booty, therefore, it was natural for me to become an advocate for curvy and size plus women in Africa,” says Doreen.

The Figure Bombshell campaign was originally scheduled to launch in December last year. However, it was postponed to this year to attract more people.

The launch date, venue and time will be communicated to the public in the due course.

Doreen Faith Namutebi is a UK based Fashion Designer and alumnus of London College of Fashion, one of the most prestigious fashion institutions in the world. She holds a Bachelors of Arts Degree in Fashion Design & Marketing coupled together with invaluable experience in the UK fashion industry. 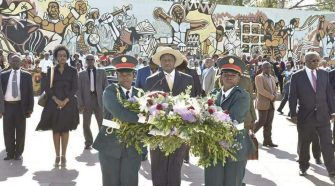