The UK government has pledged further support worth USD 1.8bn to the Global Fund to fight AIDS, Tuberculosis and Malaria to help save millions of lives around the world.

UK Prime Minister, Theresa May made the announcement of the support which is a 16 percent increase on the U.K.’s last contribution in 2016, at the G-20 summit in Japan.

May also urged other international leaders to up their contributions to the fund, which was founded in 2002 to tackle three of the world’s deadliest epidemics.

The Global Fund hopes to raise USD 14bn for its sixth replenishment cycle, but with budget deficits facing some of its largest donors, questions hover on whether the multilateral health partnership will be able to raise the full amount

Since 2002, The Global Fund has helped save more than 27 million lives and reduced deaths from these three killer infectious diseases by more than a third in the countries which it invests in.

The UK’s new three-year funding pledge will help provide life-saving antiretroviral therapy to more than 3.3 million people with HIV. It will also provide TB treatment and care for 2.3 million people and 120,000 people who suffer multidrug-resistant TB.

Using the same funds, up to 92 million mosquito nets will be distributed to protect children and families from malaria.

International Development Secretary, Rory Stewart said: “We’re deeply proud of our efforts with the Global Fund to fight AIDS, Tuberculosis and Malaria, but far too many people still die from these diseases”.

“We’re going to continue to invest in controlling and ultimately ending these diseases, and we will be making sure other countries contribute generously, ” he said.

“These diseases cross borders. Therefore, our support is something that helps the poorest people in the world, but is also something that keeps us safe here at home.”

British expertise is at the heart of global efforts to tackle AIDS, TB and malaria. The new pledge will average £467 million a year.

Last week,  Rory Stewart visited ViiV Healthcare in Hertfordshire – a UK business at the heart of tackling one of these diseases. ViiV Healthcare has developed a new antiretroviral drug to treat HIV and is voluntarily licencing it.

This means the Global Fund can negotiate lower prices and supply the drug in large volumes to developing countries, improving the lives of children and adults living with HIV.

“At GSK and ViiV we use our scientific expertise to help fight all three diseases covered by the Fund: HIV, TB and malaria. We recognise the value of partnership in achieving our ambitions to bring sustainable access to innovative treatment and prevention options for people affected by these diseases across the developing world”.

In 2017, more than 2.5 million people died from AIDS, tuberculosis and malaria. Every day nearly 1,000 adolescent girls and young women across Africa become infected with HIV;

TB is now the leading cause of death from an infectious disease; and a child still dies of malaria every two minutes.

Through the new pledge, the UK government will encourage stronger private sector engagement in the fight against malaria by doubling the value of up to £100 million of investment from private sector organisations.

The Executive Director of the Global Fund, Peter Sands, said: “The UK’s pledge is a strong message to the world that we must all step up the fight to end epidemics”.

He said an increase of 16 percent is a tremendous show of leadership.

Confronting diseases like AIDS, tuberculosis and malaria is an essential part of supporting a stable and prosperous world. The UK’s ongoing effort on global health will promote development and ensure we achieve Global Goal Three: good health and well-being for all people by 2030.

The grants are supporting Uganda’s fight against HIV/AIDS, TB and Malaria. Financing from the Global Fund has contributed tremendously to results achieved in the fight against the three diseases including increased coverage of long lasting insecticide treated nets and access to anti-retroviral therapy. 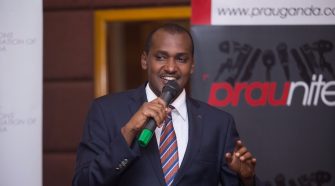