Members of the Uganda Local Government Association (ULGA) have lashed out at Parliament committees and officials from the central government for continuously tainting the image of local governments by labeling them inefficient and corrupt.

The Committee report that was based on the Auditor General’s report of 2016/17 financial year noted that a number of recurring issues have continued to hinder service delivery in local governments.

In particular, the Committee highlighted issues relating to the dwindling portion of the national budget allocated to local governments, sources of revenue for local governments and the impact of creating town Councils that are not viable in some districts, non performing accounting officers, theft through electronic money transfers from the Ministry of Finance to some local governments.

Addressing the media in Kampala, Keihwa said that ULGA as a membership body and voice for the districts and lower local governments welcomes the report but underscores the key areas of convergence, in particular the issues around enabling policy environment, inadequate funding and weak accountability Central and Local Government systems.

He said that their concerns are not new since they were previously brought to the attention of President Yoweri Museveni at a meeting held at State House on August 16 this year.

“ULGA on behalf of its members – local governments, expresses its concern over the persistent and continuing derogatory statements that come from Central Government agencies that portray our service delivery institutions in bad light as poor service delivery managers who do not account for funds advanced to them,” Keihwa said.

“We as Local Governments are equally concerned at the manner in which our Local Government representatives are not given adequate space and time to equally pronounce themselves on the queries that arise and provide proper and adequate explanation to events as they occur”.

He noted that increasingly, agencies like PAC remain aloof to the unfavorable working conditions the Accounting officers encounter in the course of ensuring that there is efficiency and performance at their level.

On the issue of accountability, Getrude Gamwera said that the Central Government has indeed gone beyond their limits and this has affected proper accountability.

She recommended a review of the Local Government restructuring process to ensure that all Government programs are consolidated and provided for under a clearly defined Leadership under the Office of the District Chairperson as defined by the Decentralization Policy, and Article 183 of the Constitution. This, she said will eliminate duplication, bureaucracy and lack of accountability. 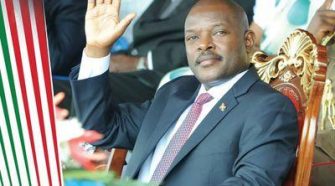