This is in response to a strong worded letter authored by President Yoweri Museveni in which he tasks the Inspector General of Government (IGG) to investigate the expensive electricity tariffs by Umeme which he says are unjustified.

In a letter written to the Minister of Energy, Eng Irene Muloni, the President accuses the officials in the Ministry of messing up concessions with UMEME which has resulted into high tariffs for electricity.

He said that electricity distributor, UMEME fraudulently inflated the magnitude of the technical and commercial losses the company had incurred far higher than what the findings of the Auditor General had stated.

Museveni wondered why the technical issues have continued to soar despite the fact that UMEME claims to have invested a whopping USD 500 million in electricity distribution infrastructure.

In a statement issued on Monday, UMEME whose 20 year concession period to distribute electricity in Uganda expires in the next 7 years, expressed willingness to work with partners as well as government on the issues raised by the President.

“The company commenced engagement with government of Uganda on extension of the concession period. This process is ongoing and further comment on the same is premature at this point,” Shonubi and Co. Advocates, the UMEME Company Secretary stated in the public statement.

UMEME adds that it is “committed to working with government, all key stakeholders and development partners to ensure development and improvement of the electricity distribution infrastructure, increase access to grid electricity, further reduction in energy losses and drive towards reduction in tariffs”.

However, the statement falls short of the explanations sought by the President regarding what he terms as “mysterious” investments and technical related losses by UMEME and why the ordinary electricity consumer continues to bear the burden of footing the costs.

According to the President, UMEME connived with some officials from the Ministry of Energy to inflate the electricity distributor’s technical and commercial losses from the 28% figure declared by the Auditor General in 2005, to 38%.

UMEME’s statement also claims the company is “not in receipt of the President’s letter.” 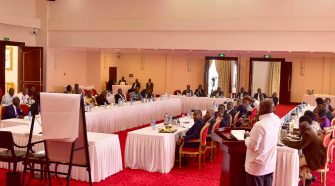